n 2022, the beloved Estonian composer Ester Mägi would have celebrated her 100th birthday, and the Old Town Educational College string orchestra will celebrate this with a concert in Laulasmaa. The orchestra was established in 1996 and has mainly focused on performing Estonian music during the last six years. During this time, they have dedicated concerts to the music of Ester Mägi, Cyrillus Kreek, Mart Saar, Veljo Tormis, Tõnu Kõrvits, Arvo Pärt and Erkki-Sven Tüür and performed all over Estonia in small villages, towns, settlements and larger cities in more than 200 concerts. In 2020, the orchestra’s first full album with the music of Cyrillus Kreek was released, and at the beginning of this year, they presented their second audio album with the music of Mart Saar.
In the past, the OTEC string orchestra has recorded beloved songs from the Estonian Song Festivals repertoire with a string orchestra, collaborated with Kristjan Üksküla on his album “Üle äär”, played on Mari Kalkun’s single “Sata-sata”, Mari Jürjens’ album “Omaenes ilus ja veas”, the soundtrack of the 100th anniversary of the Ugala theater and also recorded for the next Youth Song and Dance Festival.

The concert is supported by the Estonian Cultural Endowment. 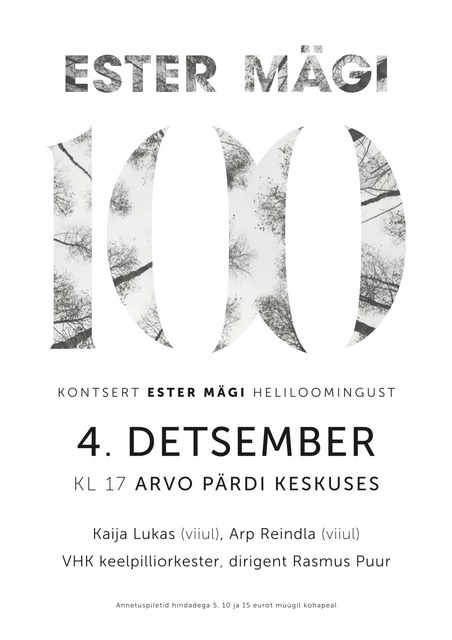