The core of the Arvo Pärt Centre is its archive, which brings together the entire creative heritage of the composer and related information and documents, both in physical and digital form.

The majority of the archival materials in the personal archive of Arvo Pärt are original documents from the composer’s family. The oldest of them dates back to 1863 – it is a Bible the composer’s grandmother used for reading to her family on Sundays. Handwritten documents related to the composer’s creative work date back to 1970s. The bulk of the family archival documents, however, started to accumulate from 1980 onwards, after emigrating to the West.

Nora Pärt can be considered Arvo Pärt’s first archivist, as for the past thirty years, she took care of the huge volume of documents. Thanks to her work, the Centre archivists did not have to start by processing the material in detail, but were able to implement the classification system Nora Pärt developed, supplementing it only with minor contemporary archiving requirements. 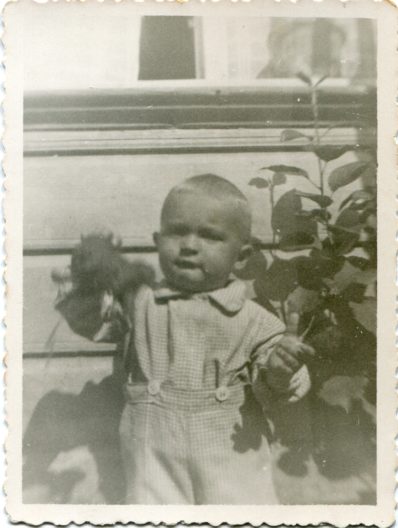 Arvo Pärt’s archive is rather substantial and contains a lot of different types of documents. The most valuable items in the archive are the handwritten scores, sketches, schemes, and musical diaries. The most recent of them have not yet reached the Centre, as the composer is still working.

Most of Pärt’s original scores and sketches from 1950s to 1970s are currently located at the the Estonian Theatre and Music Museum and the archive holds only their digital copies. The prevailing system in the Estonian Soviet Socialist Republic was for the state government to obtain the original scores, with composers left only with copies. We have also digitised materials located in the National Archives of Estonia, the Estonian Film Archives, the Estonian Literary Museum, and the Estonian Public Broadcasting Archives.

The archive also contains musical dedications written to friends and colleagues, calendars, programmes, posters, interviews with the composer and interpreters of his music, media coverage, etc. 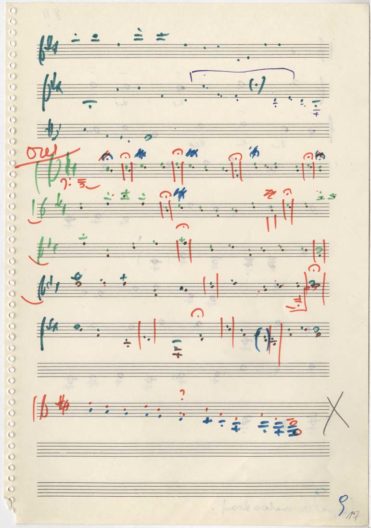 The collection has tens of thousands of photographs, related to Pärt’s private, as well as public life. The photographs are available as negatives, positives, and as digital files, with more added almost every day. The archive includes scholarly works and books, but also their rough drafts, together with notes by the composer or his wife, Nora Pärt. These notes have ended up in the archive as researchers have asked for advice, and have requested the family to read their research before completion.

The amount of correspondence is extensive: in addition to personal correspondence, there is that related to creating compositions, organising festivals, and recordings, but also letters from fans, cards, and invitations.

Arvo Pärt has been awarded over ninety honorary titles or awards, and the composer has given the relevant documents and objects to the archive. The collection also includes the composer’s furniture, gifts, and works dedicated to him.

The archive contains published records of Arvo Pärt’s music. The audio and video recordings in the archive are digital or in various formats – for example, magnetic tape of different dimensions and dating back to different times, film tape, VHS, DVD, and many more. The collection also includes private recordings of rehearsals, concerts and interviews made by the composer’s family members, interpreters, researchers, or journalists.

In 2016, the first private collections were donated to the archive. These include a collection of documents relating to Arvo Pärt, once belonging to Juta Kurman, an active member of the Estonian Music Centre in the US, and a music critic for the newspaper Vaba Eesti Sõna; and an image collection from Eric Marinitsch, a representative of the publishing company Universal Edition, with photographs taken over the course of twenty years accompanying Arvo Pärt at concerts.

The archive materials are accessible only in the Centre.