Archive work and storage rooms, Rooms for personnel, musicologists and other staff

A visit to the Arvo Pärt Centre starts in the spacious foyer. From here you can go to the exhibition area to listen to the composer’s music or head to the film room where films presenting Arvo Pärt and his work are screened. Between these, the way leads along to a classroom, a concert hall and a cosy library.

The other side of the foyer directs the visitor towards the centre’s shop, cafe and children’s area, which can be accessed without a ticket. A selection of Arvo Pärt’s musical scores, music CDs and thematic writings can be found in the shop along with postcards and souvenirs of the centre, which can also be purchased there. An educational and playful children’s area awaits both younger and older visitors at the edge of the cafe, where you can test your knowledge in a quiz about Arvo Pärt and watch animations, which include music composed by the young Arvo Pärt.

Additional information concerning events and activities taking place in the building can be found at the information desk opposite the entrance where tickets are also sold.

The spacious well-lit exhibition area will be left empty for the first months after the building has been opened in order to present the unique architecture of the building and the view of the forest visible from the space. This is an area where visitors are invited to walk, think and listen privately to music. For this you can take the “Arvo Pärt music guide” from the information desk – a music listening app which was developed specifically for the centre, and which includes a representative selection of recordings of Arvo Pärt’s music with background and biographical information about the composer.

An Arvo Pärt Centre permanent exhibition will be opened in the new year, which will focus on the word, sound and silence, and which will be based on the composer’s musings from his musical diaries.

The film room is intended for watching films in smaller groups, accommodating up to 15 people. The programme includes screenings of documentaries and television programmes connected to Arvo Pärt’s life and work. The season will open with a short documentary about the composer by Jaan Tootsen and Jaak Kilmi commissioned by the centre.

The 150-seat chamber hall with its calm forest views creates a special atmosphere for concerts and recordings. The acoustics of the hall have been set by the Spanish company Arau Acustica and is foremost suited to chamber orchestras. Pieces for chamber choirs and string ensembles as well as for soloists and ensembles with various compositions are also in the foreground of Arvo Pärt’s work. Naturally, the camber hall at the centre is not created solely for presenting Pärt’s work but is also open to music by other composers and music from various eras.

It is also possible to use the hall for conferences, film screenings, discussion evenings and much more.

The small library with its fireplace offers a chance to delve into literature on the fields of music, art and theology. Most numerous among these are publications that tackle orthodox spirituality and theology, and which have been an important source of inspiration for Arvo Pärt. The core of the library is approximately 2,000 volumes from Arvo and Nora Pärt’s personal collection, which was amassed during the composer’s creative years.

Every visitor to the centre that would like to acquaint themselves with the publications in the collection, including the scores of the composer’s work, or listen to Arvo Pärt’s music from CD are welcome in the library. Private desks and the opportunity to use the digital archive also await researchers.

The classroom with three glass walls that skirt the courtyard, is an exciting space for conducting educational programmes at the centre. Lessons about Arvo Pärt’s life and work welcome students of all ages. The classroom is equipped with quality audio and video technology. Lessons can take place by prior arrangement.

The heart of the centre – Arvo Pärt’s archive – is located in the employee area, and everyday visitors to the centre cannot access it. The valuable archival material is kept in three storage areas. The largest of these contains the composer’s handwritten scores, sketches and schemes for pieces, photographs, concert programmes, correspondence and much more on paper. A special room kept at a lower temperature contains a rich collection of audio and video and the digital database of the archive also has its own separate room.

Next to the storage rooms, there are offices for the archivists, musicologists and other employees of the centre.

The creative room with its view of the forest is intended as a study for the centre’s artists in residence. Not only are composers and musicians welcome, but also representatives of other fields – writers, artists, film and dance practitioners, and also small collectives. In the future, the centre plans to establish a resident artist stipend, which would allow a creative person to work at the centre for a longer period and would allow them to embark on larger pieces and projects.

One of the particularly special rooms at the centre is Arvo Pärt’s study aka the Berlin room, which is mostly furnished with personal objects from the composer’s Berlin home. In addition to a piano, small spinet, scores and books, there is also an old tobacco cupboard in which the composer kept his musical diaries (now they are kept in the centre’s archive), and a massive writing desk on which Arvo Pärt wrote many of the pieces created during his Berlin years.

The Berlin room is the composer’s private study and its doors are generally closed to visitors to the centre. 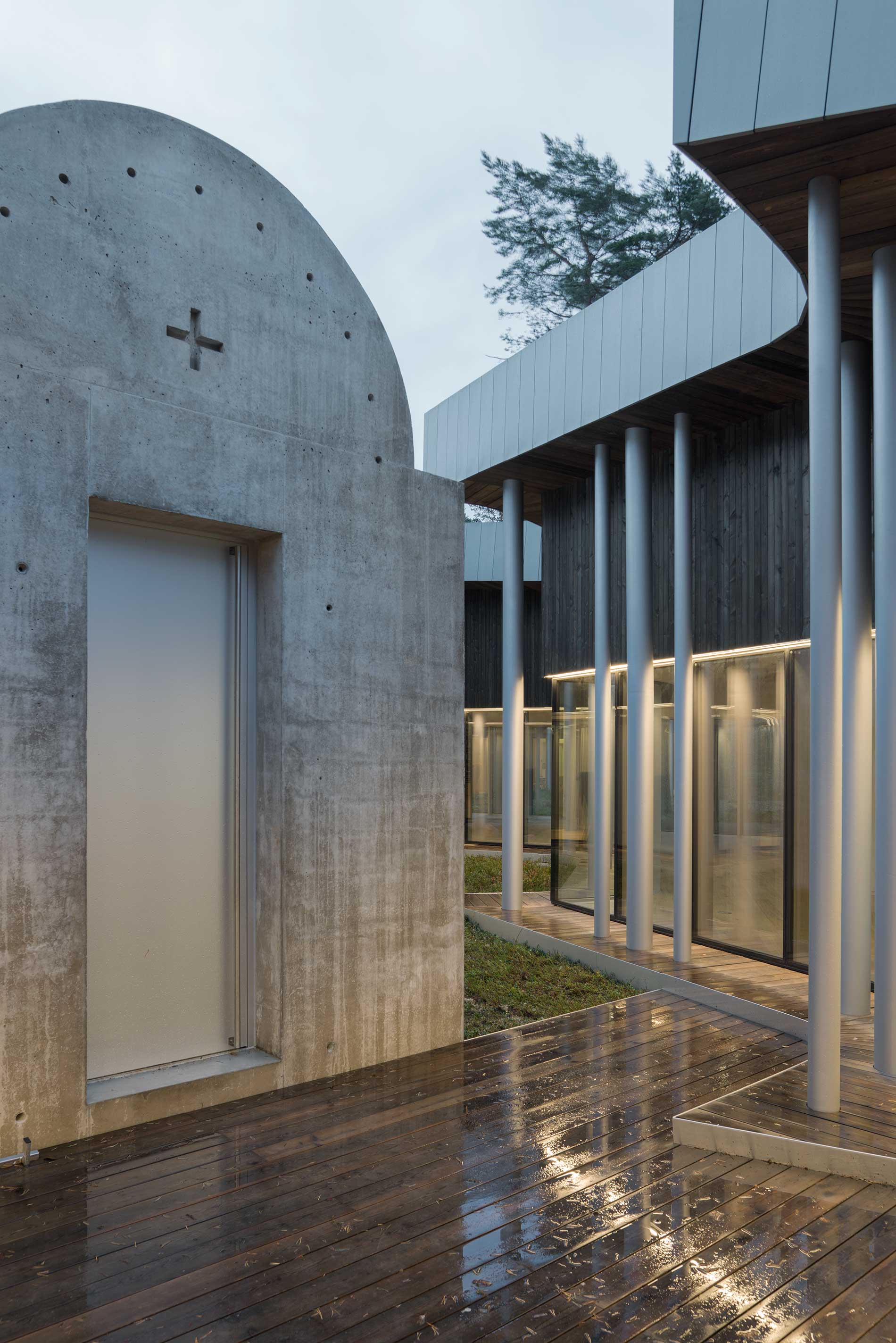 The 15m2 chapel, built following traditional Greek architecture, is situated in the largest courtyard at the centre and can be reached through the library. As a quiet place with subdued light, the chapel is suited to thinking and self-reflection. The chapel is dedicated to St Sophrony the Athonite, the founder of the Patriarchal Stavropegic Monastery of St. John the Baptist in Essex. Arvo and Nora Pärt were closely connected to father Sophrony for more than ten years and through him they were exposed to the world of the writings of father Sophrony’s teacher, Saint Silouan, which is of notable importance in the work of Arvo Pärt.

A light and slender spiral tower reaches above the pine forest, from the top of which views of Lahupera and Lohusalu bays, the harbour, and the Pakri peninsula and windfarm are visible. The observation tower is open from spring to autumn during the centre’s opening hours. Up to five people can access the tower at a time accompanied by a centre employee.

Archive work and storage rooms, Rooms for personnel, musicologists and other staff