Nieto Sobejano Arquitectos was founded in 1985 by Fuensanta Nieto and Enrique Sobejano and has offices in Madrid and Berlin.  Enrique Sobejano has worked as an architect since graduating from the Universidad Politécnica de Madrid and the Graduate School of Architecture and Planning at Columbia University in New York in 1983. He is a professor at the Universität der Künste Berlin (UdK), where he holds the chair of Principles of Design. He is a permanent member of the Akademie der Künste Berlin (AdK).

Fuensanta Nieto has worked as an architect since graduating from the Universidad Politécnica de Madrid and the Graduate School of Architecture and Planning at Columbia University in New York in 1983. She is a founding partner of Nieto Sobejano Arquitectos and a professor at the Universidad Europea de Madrid.

They are the recipients of the 2007 National Prize for Conservation and Restoration of Cultural Heritage and the 2010 Nike Prize issued by the Bund Deutscher Architekten (BDA), as well as the Aga Khan Award for Architecture (2010), the Piranesi Prix de Rome (2011), the European Museum of the Year Award (2012), the Hannes Meyer Prize (2012), AIA Honorary Fellowship (2015) and the Alvar Aalto Medal in 2015.

Time is usually considered the principle that structures musical composition, in the same way that architecture is defined as the art of creating space. However, it is no less true that the perception of an architectural work also resides in its temporal dimension while the sound is a consequence of the spatial conditions of the place in which it is performed. This dichotomy that links music and architecture – time and place – is at the origin of our project for the Arvo Pärt Centre searching a balance between the intimacy of the Estonian artist’s compositions and the serene beauty of the landscape.

Located in the middle of a dense forest with pines of great height, the proposal arises from a pattern of polygonal courtyards whose variations in size and position generate different spatial sequences. Like the reflected image of a mirror in a mirror – “Spiegel im Spiegel” – the variations of the pentagonal theme unfold into a non-hierarchical interior space, surrounded by a continuous skin that forms a dialogue with the soft topography and the vertical rhythm of the trees. The building does not have a beginning or an end, it does not have a main or secondary facade: it is perceived in continuity, admitting multiple routes. The relationship between the interior and exterior is filtered by a series of thin circular columns, which evoke rhythms of some Arvo Pärt compositions, also from the surrounding trees. The density in the arrangement of the columns as well as the degrees of transparency or opacity of the outer skin are adapted to the areas that need greater or lesser presence of natural light. A large zinc roof platform folds up on the surface of the land wrapping and protecting the interior spaces. The patterned series of pentagonal courtyards is contrasted with the sinuous curved walls, establishing a conversation -architectural, perhaps also musical- with the organic forms of the place.

Two unusual architectural elements are inserted into the building. As accents of a musical composition, they assume a strangeness that deeply links the project with the personality of Arvo Pärt. A minimal chapel, conceived as an abstraction of a small Orthodox temple, is located in one of the patios, as if it had been found in the place. On the other hand, a slender and light metallic helical tower rises above the pine trees to allow from the top views towards the Baltic Sea. The concrete chapel is anchored in the terrain to which it belongs, while the metal tower rises towards the sky, an opposition that leads us to two initial impulses inherent in the action of building: the will to merge intimately with the ground opposed to the aspiration to reach an impossible weightlessness.

The patient time of the project and construction of the building also involves the process of our own interpretation of Arvo Pärt’s work. As in a musical improvisation, unexpected findings help us uncover hidden connections. Randomly superimposing our architectural representations with the original notations for the “Tabula Rasa” score, surprising interferences arise: fragments of parallel texts, pentagrams, terrain sections, common geometries, interchangeable rhythms, suggestions that become a metaphor for the profound connections that link sound, time, and place. 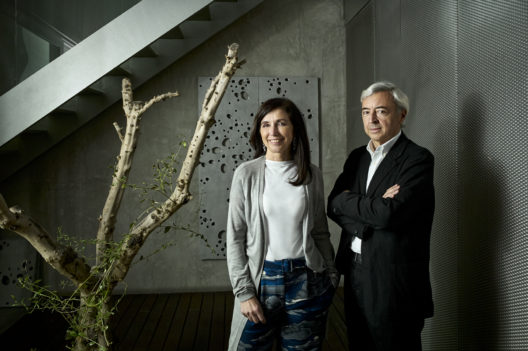