27–30 August Arvo Pärt Centre invites viewers to the tenth edition of Arvo Pärt Centre Film Nights, presenting screenings that introduce particular aspects of Arvo Pärt’s work and his concert music in films to a wider audience. This year with the Film Nights the centre celebrates the composer’s 85th birthday by presenting a selection of the best films from previous Film Nights. For the first time, in collaboration with Estonian Public Broadcasting, three August Tuesdays films will also be screened on ETV2.

For its tenth edition, the Arvo Pärt Centre Film Nights invite the audience to step into a world of dialogue between various forms of art, sound, silence, and moving image.

“This year we are offering seven distinct film experiences, however, as 2020 has been a special year, the festival, too, needs to be special and flexible – Arvo Pärt’s sound work and cinema still meet on screen, although the selection of screens is broader than usual,” said Kaarel Kuurmaa, the artistic director of Film Nights.

To celebrate the beginning of the programme’s second decade, a selection of films previously screened at Film Nights, can be viewed on Estonian Public Broadcasting, on Tuesdays in August at 21.30 ETV2. On 11 August a religious thriller “The Apparition” (2018) set in a small town in the French Pyrenees, directed by Xavier Giannoli will be screened. It was first shown during Arvo Pärt Centre Film Nights the same year the film was released. Second on ETV2’s programme on 18 August is the Bulgarian director Julian Tabakov’s highly original and heartfelt portrait of his grandmother “Tzvetanka” (2012) that screened in 2013 at St. Catherine’s Church with the director present. And on 25 August the film “The Wait” (2015), starring the charming Juliette Binoche, from the Italian director Piero Messina will be screened. In 2016 the director visited Tallinn and presented his film at the Sõprus Cinema.
From 27 August, it will be possible to experience the magic of cinema in the cosy space of Sõprus Cinema again, where two meditative films perfect for the big screen will be shown. The first film is the very special cinematic work “Gerry” (2002), directed by the renowned Gus Van Sant, starring co-screenwriters Matt Damon and Casey Affleck, also screened at the centre’s Film Nights in 2011, and “Times and Winds” (2006) by the Turkish director Reha Erdem featuring Arvo Pärt’s music and shown at the Film Nights in 2012.

The 10th Film Nights conclude in a more intimate setting under Laulasmaa’s pines in the hall of the Arvo Pärt Centre with two documentaries. The Film Nights invite viewers to follow Arvo Pärt’s close collaborator, the founder of ECM Records and music producer Manfred Eicher in “Sounds and Silence” (2009) and witness his passionate search for balance between sound and silence. On Sunday afternoon the film programme concludes with “And Then Came the Evening and the Morning” (1989) by the Estonian director Dorian Supin who has portrayed Arvo Pärt more than anyone else. This film, made more than 30 years ago is becoming increasingly valuable as a document of an era, portraying Arvo Pärt’s life away from Estonia at the end of the 1980s.

The artistic director of the Film Nights is Kaarel Kuurmaa.

The films will be screened with Estonian subtitles, tickets are available on Fienta, at Arvo Pärt Centre and Sõprus Cinema. 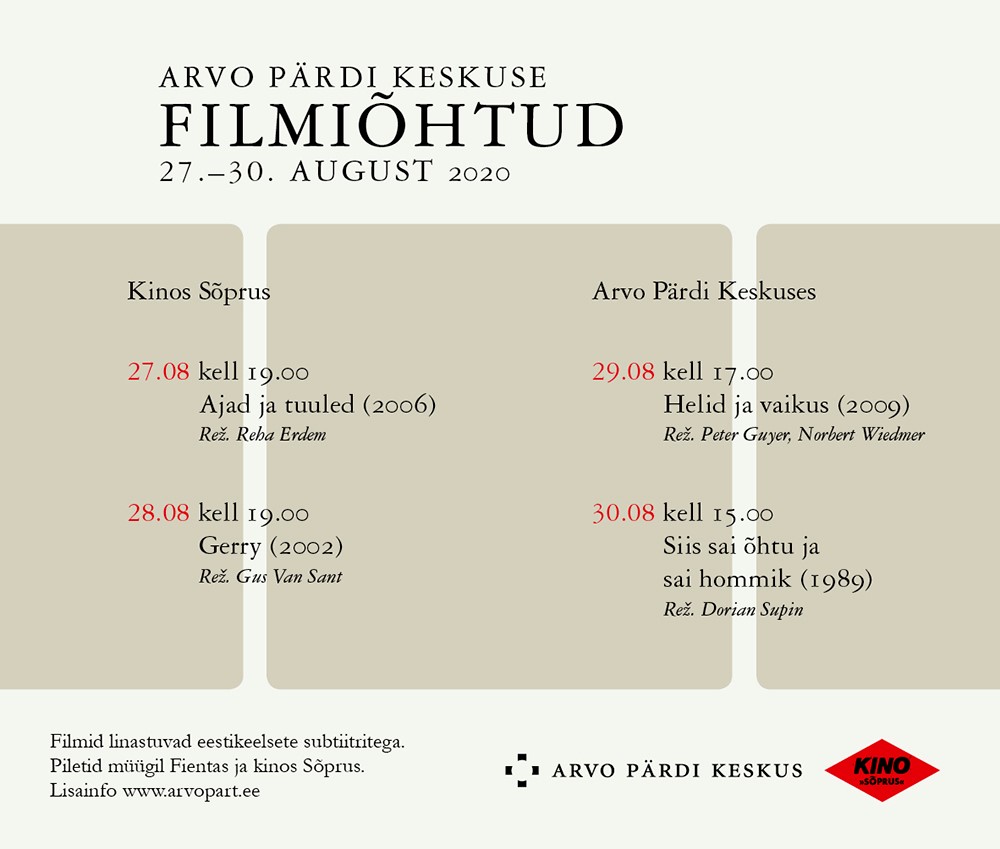