In honour of Arvo Pärt’s 82nd birthday, the musicology conference, “Arvo Pärt: Icon of Modernity” was held on 11 September in London. The short yet dense conference was organised by the Royal Academy of Music in cooperation with the Estonian Embassy in London and convened by Professor Robert Sholl, musicologist and researcher of Pärt’s work.

It is remarkable for a scientific conference to focus on a single contemporary artist and his work, but it is already the second academic event this year dedicated to Arvo Pärt’s oeuvre. The first, held in May, was a four-day conference “Sounding the Sacred” in New York. A conference dedicated to Arvo Pärt was also organised in the United Kingdom in 2010, when London’s Southbank Centre hosted a two-day series of presentations, “Arvo Pärt: Soundtrack of an Age”.

This time the conference in the premises of the London University included six presentations which all approached Pärt’s work from quite different angles.

In her presentation “Uniformity, variety and timbre – the different versions of Pärt’s works”, Luisa Curinga (Fermo G. B. Pergolesi Conservatory) studied the role of timbre in the identity of a musical work, demonstrated through the various versions of Fratres and Summa. Curinga emphasised that although timbre is not the most important element for the composer, a multitude of different versions and several important details in instrumentation are a clear sign of Pärt’s particular timbre sensitivity.

The presentations by Walter Kurt Kreyszig (University of Saskatchewan) and Alexander Lingas (City, University of London) focused on Pärt’s treatment of texts. Kreyszig has studied the relationship between text and music in Western church music throughout the centuries and argues, using the example of Pärt’s Missa syllabica, that the composer offers an alternative response to the respective regulations of the Council of Trent in the 16th century and Palestrina’s church music resulting from these. According to Kreyszig, Pärt’s exclusively syllabic style in bringing forth the liturgical text represents a novel approach in the contemporary church music of the Western tradition.

Alexander Lingas, an expert in Byzantine music, approached Pärt’s oeuvre from the perspective of Orthodox theology, exploring the extent to which Pärt’s works suit specific Orthodox musical traditions and how. The composer’s focus on words and sacred texts demonstrates his loyalty to the viewpoint of the heads of the Eastern Orthodox Church, according to which music is not a goal in itself, but a tool for passing on sacred words. This principle is especially strongly rooted in the Slavic Orthodox tradition which has most directly influenced Pärt.

In her cultural theoretical meta-analysis, Laura Dolp (Montclair State University, New York) studied the manifestations of medievalism related to Pärt’s work, especially using the example of Miserere. According to Dolp, the phenomenon of Pärt has energised a variety of medievalisms as both a practice and an ongoing mode of perception. To study these, she approached Pärt’s music from nine different aspects, among them the compositional process, influences of early music, imprinting the medieval Pärt, pre-Enlightenment theologies and models of theatre among others.
Andrew Shenton’s (Boston University) presentation was based on the claim that although Pärt has not written an opera, several of his shorter compositions (Dopo la vittoria, And One of the Pharisees…, L’Abbé Agathon etc.) offer clear references to the logic of stage works both in terms of their subject matter (legends of the saints and parables) and formal structure (specific events and characters) as well as the narrative nature of the musical material (musical symbols and leitmotifs). According to Shenton, we can find parallels to traditional homiletic techniques in Pärt’s storytelling.

Anna Shvets (Maria Curie-Skłodowska University in Lublin) has centred her research on the assumption that Arvo Pärt’s creative process is based on strict mathematical regulations, which makes it possible to analyse his works by means of computer software to determine these regulations as well as sounds that deviate from these. This, in turn, allows us to better visualise and model Pärt’s works. Shvets presented her analysis based on six instrumental works. However, as a result of a discussion following her presentation, researchers agreed that the entire body of works by Pärt cannot be analysed based on this principle.

The presenters at the conference are active and devoted researchers of Pärt’s work as well as authors of several important publications. In addition to the compilations Cambridge Companion to Arvo Pärt (edited by Andrew Shenton, 2012) and Contemporary Music and Spirituality (edited by Robert Sholl and Sander van Maas, September 2016), the compilation Arvo Pärt’s White Light (edited by Laura Dolp) was published this August.

Representatives of the Arvo Pärt Centre also participated at the conference, which gave them an opportunity to introduce the development plans of the Centre and build forward-looking contacts with the world’s leading researchers of Pärt’s work, for whom the archives of the Centre are a very valuable basis for future research. 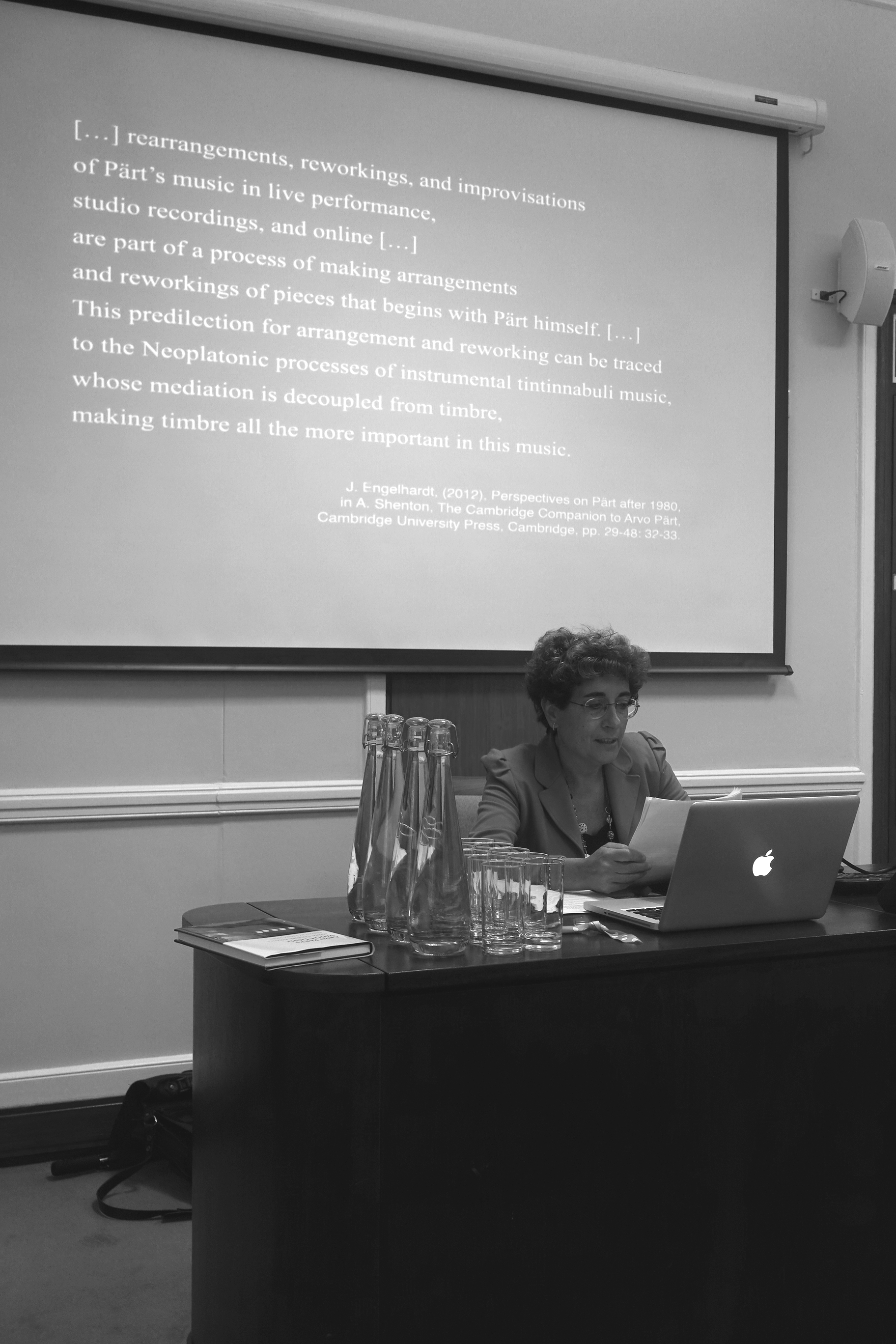