In the course of our archival work, we have come to the groundbreaking year of 1968, when Arvo Pärt composed “Credo” for piano, mixed choir and large symphony orchestra. In terms of musical material, it was a work of the 1960s, combining elements of dodecaphony, sonorism, collage and aleatoricism. This is how musicologist Merike Vaitmaa summed up the musical significance of “Credo” in her review of the premiere: “The juxtaposition of early music in its original form with the new, so that it becomes the basis of the main conflict, of the whole concept, has never been done before, as far as we know.” She added very prophetically, “It doesn’t matter whether Pärt writes any more collages, or perhaps he will give up collages one day, and maybe something new will be born here.” We can now say that this work summed up his first creative period, reflecting Pärt’s perspective in his previous work, and that “Credo” (Lat. “I believe”) was also a public confession of faith: a fundamental internal turning point, a signpost towards what the composer would be looking for in the future. This was expressed in the choice of text: for the first time, Pärt created a work based on a sacred text that became the basis for the musical structure of the whole work: a direction that would become pivotal in the composer’s next creative stage, the tintinnabuli period.

The Latin text originates from two sources: the Christian Confession of Faith and Chapter 5 of the Gospel of Matthew, or the Sermon on the Mount. When talking to the composer, it was fascinating to discover that, in the quoting of the prelude in C major from the first volume of Johann Sebastian Bach’s “The Well-Tempered Clavier”, which was used in a collage, one can hear another well-known piece from the history of music — Bach-Gounod’s “Ave Maria” — which is related to another text, the Marian prayer. While the words of the Creed are sung “I believe in Jesus Christ”, it is as if the prayer to the Mother of God is sung. We can also see from the sketches that the reference to the prelude is sometimes written as “Ave Maria” in the scheme of the work.

Bach’s music had already been used by Pärt in his earlier work, “Collage on the theme B-A-C-H” (and later in “If Bach had been a beekeeper”). In “Credo” the composer continues along the same path, expressing his longing for purity, truth and a world of ideals. Here, however, he goes even further: of the 48 preludes and fugues in Bach’s two volumes, Pärt chose the prelude in C major: symbolically the music of the white keys, further emphasising the quest for simplicity and purity. A few years later, it was the music of the white keys, i.e. diatonic music, that became one of the cornerstones of the tintinnabuli sound. Nora Pärt, the composer’s wife, who participated in the interview about the creation of “Credo”, said, “It was a foretaste of his future search: purity, clean [i.e. white] keys, no black keys. C major: the most elementary tonality; and the work ends with single notes in C major. This is a direction that took almost eight years to find. But this feeling, this need, was associated with purity. And he often wrote later in notebooks that he wanted one note, to make music on one note, or on white keys. That was the image he was working on all the time. For me, ‘Credo’ is prophetic.”

In the context of the themes of evil and the fall of humanity in “Credo”, Arvo Pärt drew a striking parallel between “Credo” and his late masterpiece “Adam’s Lament”, as well as the 4th Symphony.

Although “Credo” has been the subject of thorough analysis, it was very interesting to delve deeply into the music, to dissect the underlying ideas and to listen to the composer’s reflections. A close study of the sketches confirmed that Pärt’s rigorous use of ratios and mathematical rules is perfectly systematic throughout the work. Even in the sections that symbolise evil and chaos, when the choir and orchestra are shrieking, clapping and making other noises, these sections are also strictly regulated and organised by means of the twelve-tone technique, increasing and decreasing mathematical processes or considering the number of syllables. Similar techniques are characteristic of the next creative period.

A large number of sketches and diagrams from the creative process of “Credo” were preserved, most of which can be found in the Estonian Theatre and Music Museum. During the conversation, we were able to look at the original manuscripts of the work, which the composer had not held in his hands for 40-50 years. The Centre has been given the opportunity by the museum to digitise them for its archives. The materials are very fragile and in need of restoration. During the research, a pile of sketches became a musical score assembled in a logical sequence.

One can imagine that on 16 November 1968 the musicians gathered in the Estonia Concert Hall felt great anxiety, because the Estonian Radio and Television Symphony Orchestra’s first subscription concert, with the Mixed Choir of Estonian TV and Radio, the pianist Mart Lille and the conductor Neeme Järvi, was to feature the premiere of Arvo Pärt’s “Credo”. And indeed, this premiere was possible during the Soviet era only due to a set of favourable coincidences: the responsible officials of the Composers Union had gone on a work-related trip to Moscow and could not come to the rehearsal, the official first hearing at the Composers Union took place only three months later, the Latin text of the work was not understood, and the Estonian representative orchestra was led by Neeme Järvi, who was not afraid to take risks or face possible consequences. In fact, Arvo Pärt recalls that Neeme Järvi’s courage and enthusiasm played a major role in the premiere. There was no summary of the work in the programme, as it was impossible to reveal its background and content, nor in the review by Merike Vaitmaa published in Sirp ja Vasar. The nature of the piece was not explained to the musicians at the rehearsal either. However, the consequences were not long in coming: further performances of the work were impossible, and Pärt’s endeavours were more closely scrutinised. However, “Credo” was always mentioned in his composition lists and reviews as one of his most important compositions. It is also noteworthy that, when “Credo” was finally discussed in the Composers Union in February 1969, the minutes of the two-and-a-half-hour meeting did not contain any record of the speeches and discussions. The repercussions of the turbulence were still felt years later, when in 1976 the publishing house Sovetskiy Kompozitor was not allowed to publish an article about Pärt written by Uno Soomere, and “Credo” was cited.

It seems that listeners did not need any profound explanation: at the premiere, the whole work was repeated in response to seemingly unceasing rapturous applause. Merike Vaitmaa, too, in her review of the concert, called the work the highlight of the evening. According to the recollections of many contemporary musicians, Arvo Pärt’s premieres were always highly anticipated and provided an experience that is still vividly remembered decades later. This was also confirmed by the annual review published in Sirp ja Vasar at the end of 1968, which showed that many people from different fields saw the premiere of “Credo” as the most memorable event of the year. This is captured by the linguist Endel Nirg’s comment: “Rarely do you come to such a full and powerful realisation that the power of the human soul is something immeasurably great, unquenchable and invincible.”

The conversation about the creation of “Credo” with Arvo Pärt was prepared and conducted by Kristina Kõrver and Kai Kutman. 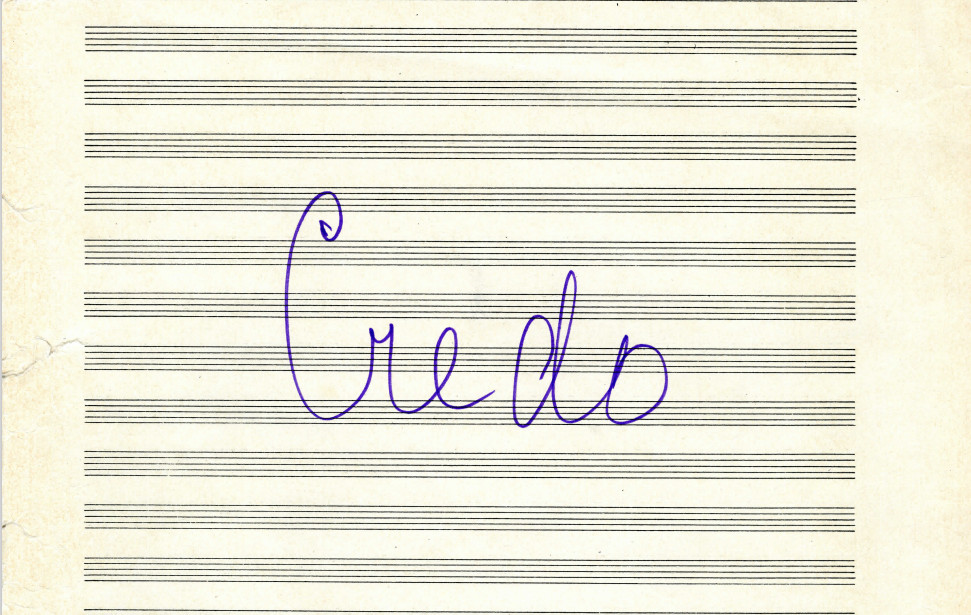 Fragment of the manuscript of "Credo"