On the evening of 7 April 1977, the audience filling about two-thirds of the Estonia Concert Hall had gathered to listen to the concert Season Ticket No. 1. Shostakovich’s Symphonies performed by the Estonian Radio Symphony Orchestra conducted by Eri Klas. Also among the audience was 41-year-old Arvo Pärt, whose creative path had recently undergone a major upheaval. After years of searching, the composer had finally found his unique style, tintinnabuli, and audiences had heard several of the works in this new, especially reduced sound language here in the same concert hall six months earlier.

Pärt’s latest composition, Cantus in Memory of Benjamin Britten, the first orchestral work in which he experimented with his new tintinnabuli style, was included in the programme of the concert on 7 April at the very last minute.

Just a week before, on 29 March, Cantus was heard at a traditional meeting of the Estonian Composers’ Union to decide whether or not to approve it for the concert stage. Previously, Pärt had been harshly criticised by the committee at similar meetings because of a sound language unsuitable for a Soviet composer. Cantus, however, was unanimously received with enthusiasm. It was even suggested to add a few more passages to the work so that the profound influence of the music could be enjoyed for longer. Musicologist Aurora Semper noted that “only a very talented person can compose with such simple tools”.

Inspiration from the Renaissance

For years, Arvo Pärt had been looking for a special purity and clarity of expression in music, which is especially characteristic of Medieval and Renaissance music. He suddenly discovered such purity in Benjamin Britten’s ballads. This made the announcement of the death of the English composer on 4 December 1976 even more shocking, because Pärt had just recently discovered Britten for himself.
At the same time, in several of his musical sketches the composer experimented with a specific form of music that was known especially during the Renaissance – the prolation canon. He was fascinated by the absolute rigor of this form and was eager to use it in his works. This form became the basis for several of Pärt’s works.

On the pages of his music diary for March 1977, he had sketched the outline of the prolation canon, or the “formula” for Cantus on the pages of his music diary four times. For some reason, the composer had to revisit the idea repeatedly before embarking on orchestration, voice leading and the development of the dynamics. The music diary reveals that three days before the listening session at the Composers’ Union, Cantus had no title. Pärt’s thoughts revolved around the theme of water – Water Clock, Water Canon, Waters in Time – but at some point the composition received a dedication to Benjamin Britten, out of respect and love for the work of the recently passed colleague.

The music of Cantus is born from silence. The score begins with a three-bar pause followed by bell tolls that remind us of a funeral bell at a cemetery. One by one, five layers of voices enter in a descending tone row in a minor key, like five strands which intertwine to form the pattern of a sound fabric. There is something mysterious in this flow of music because the listener does not perceive the tone rows descending at different speeds as a disturbing dissonant cluster. Rather, the dissonances delicately slip by, without straining the ear or feeling heavy. The endlessly flowing sound river of the string orchestra is reminiscent of the hollow sound of church bells – a cluster of sounds in which a certain order and symmetry can be perceived.

On the covers of one of the composer’s music diaries we can find the keywords “smooth landing” and “slow motion”. Indeed, many people experience a feeling of falling in slow motion while listening to the music. The eight minutes of Cantus are like a single stretched moment that seems to last an eternity. However, this journey has a destination; the entire composition is headed towards a specific point, a single end goal. The bell tolls regularly throughout the work, but falls silent the moment a turn occurs in the music: one by one, the instruments reach their “home” in a low register, a specific triad in A minor.

The bell tolls for the last time at the very end of the work, fading into silence again.

The clarity and rigor of the structure of Cantus is considered to be one of the main reasons why this work is one of the most beloved and most performed in Pärt’s oeuvre. “Simple structure creates tremendous emotionality and integrity,” Andres Pung noted in a review of the premiere in Kodumaa newspaper on 13 April 1977.

Farther away from home

In the few years since its premiere in Tallinn, Cantus was performed in many places in Russia, Georgia, Finland, Slovenia, Sweden, Italy and England. Gennady Rozhdestvensky, chief conductor of the BBC Symphony Orchestra, proposed that the work be performed at the Southbank Centre in London in December 1978, but the performance was abruptly cancelled. Namely, Arvo Pärt was not allowed on the plane in Moscow because his border crossing permit had been revoked at the last minute. The border of the Soviet Union was closed to all artists in connection with conductor Kirill Kondrashin’s fleeing to the West the day before, during a concert trip to the Netherlands. The BBC Symphony Orchestra performed the piece six months later, in August 1979, at the prestigious BBC Proms festival. The video of it is still available on Youtube.

Cantus was one of the works that the border guards at the Brest-Litosvki railway station listened to while searching the suitcases of the Pärts who had left their homeland. Nora Pärt recalls: “There I truly experienced the effect this [tintinnabuli] music had on people: suddenly everything felt so normal, so calm, so beautiful.” (Enzo Restagno “Arvo Pärt peeglis”, Eesti Entsüklopeediakirjastus, 2005, p. 74)

In the first weeks after emigrating to Vienna in February 1980, in the midst of settling there and all the hardships of everyday life, the composer was busy revising the score of Cantus. While the first composition of the work included a harp in addition to a string orchestra, which the composer had added to strengthen the central viola line and amplify the bell-like timbre, now, after several performances, the harp seemed redundant. The revised score for Cantus was published by the Vienna-based Universal Edition in the same year.

Neeme Järvi conducted Cantus immediately after his emigration at his concerts in Cincinnati, Gothenburg, Aldeburgh and London. The correspondence between Järvi and Pärt in the summer of 1980 reveals that Cantus was a great success in London, which the composer himself was able to experience on the spot. In addition to the letter, Järvi sends Pärt a recording of Cantus from the Cincinnati concert, which he says is even better.

The first studio recording of Cantus was made by the Staatsorchester Stuttgart conducted by Dennis Russell Davies in 1984 as the first collaboration with producer Manfred Eicher and the record company ECM. Today, recordings of Cantus can be found on more than 50 records and it has also been featured in numerous dance performances and more than 30 films.

Not only for Britten

Unlike many of Pärt’s other works, Cantus is not associated with any spiritual text; however, listeners may still associate its music with spiritual themes. We can read from a Buddhist-oriented blog in which the author compares rows of descending notes to spiritual searching on an ever deeper level: “The spiritual life is like this. We search around looking for answers to the big questions. /…/ We do this on an ever deeper level. /…/ As the double basses finally hit their note there is a palpable sense of relief, of relaxation combined with energy.
And then suddenly the music stops – or almost. In this moment there is a sense of spiritual death. /…/ We die to our old self, our old self-centredness. But with spiritual death there is spiritual renewal, and even though we don’t hear the striking of the bell, it is struck, and rings on after the reverberations of the strings have died away. /…/ And so we return to silence, once again written into the score. But this is not the silence of the absence of sound. It is the silence that is sound, and the sound is silence.” (Dharmachari Jayarava “Cantus in Memory of Benjamin Britten by Arvo Pärt”, Jayarava.org, 2006)

Pärt’s music is sometimes associated with sad events and catastrophes around the world. Cantus has been linked to the 9/11 terrorist attacks. Just two days after the horrific events, Ned Raggett published an article on Cantus on his blog, combining the rupture of the Twin Towers with what is happening in music and seeking redemption though music: “/…/ who finds salvation in music? My choice is clear. The Cantus is no longer for Britten. It is no longer written by Pärt. In the universe I inhabit, it is fixed elsewhere.” (Ned Raggett “An unending cry, an endless sob, a ripping of the heart”, Freakytrigger.co.uk, 13.09.2001)

The well-known documentary by Michael Moore, Fahrenheit 9/11, has the bells of Cantus sounding against the background of a dark screen, marking the moment when terrorist planes attacked the Twin Towers. Then the reactions of the people are shown, their astonished-frightened faces, with a sound fabric of descending notes as a soundtrack.

The Estonian National Symphony Orchestra recently performed Cantus at the concert of the symphony orchestras of the Baltic countries in support of Ukraine. In La Poste du paradis , a music production in Montréal, the sounds of Cantus mark the final breaths of the protagonist. There are many examples like these.

The funeral bell of Cantus, the sound of a string orchestra and the slowly descending notes in minor key support and reflect the deep sorrow in the human soul, its pain and grief from the world’s suffering. But just as eternity can be hidden in a single blink of an eye, or spiritual renewal can lie deep in the abyss, there is a subtle brightness and hope hidden even in the deepest sorrow and grief. Listening to a meticulous performance in a space with excellent acoustics, an attentive ear can catch a C-sharp in the final chord of Cantus, turning the final minor chord into a subtle major.

Written by Karin Rõngelep based on a discussion of the compositional process at the Arvo Pärt Centre on 11 January 2022. 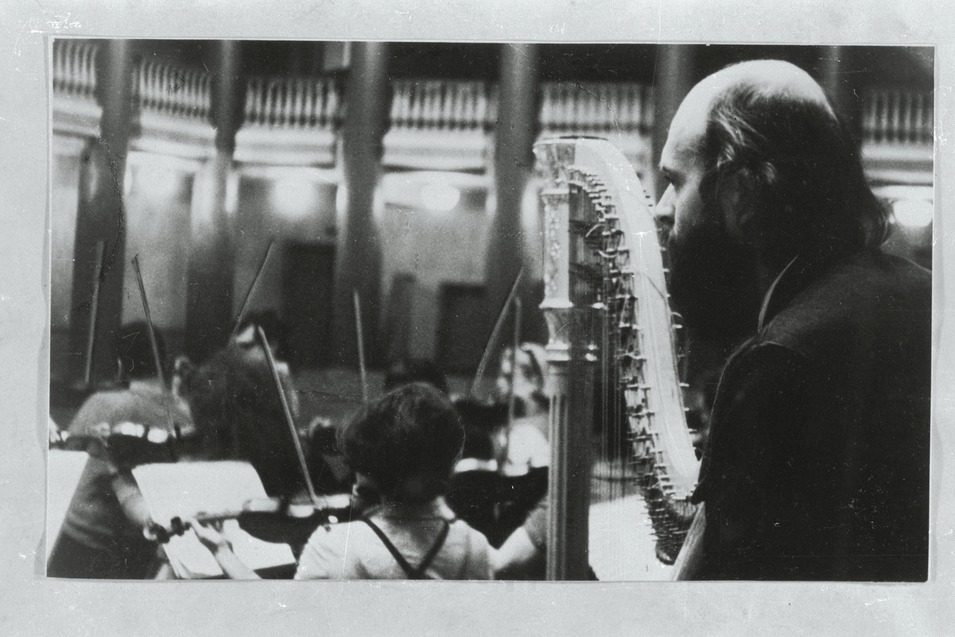 In the photo: Arvo Pärt at the rehearsal for his composer’s concert in Tbilisi on 15 May 1978. Also performed at the concert was Cantus in Memory of Benjamin Britten. In addition to the string orchestra, the original composition of the work also included a harp, which the composer later removed from the score.