From 22 until 25 August, the ninth Arvo Pärt Centre film evenings will bring the viewers a new documentary about the influence of Arvo Pärt’s music. The film has already been screened at several international festivals and is now being presented to Estonian audiences for the first time. The director of the documentary, Paul Hegeman will also attend both screenings.

This year’s Arvo Pärt Centre film evenings will present films not yet screened in Estonia, which illustrate how far-reaching and globally touching Arvo Pärt’s music is. This year’s films take us on a journey from the solemn churches and concert halls of the Netherlands to the slums of Kinshasa, capital of the Democratic Republic of the Congo, and the world of start-up companies in Silicon Valley. A common theme in all films is the courage to do your thing, remaining true to your ideas despite setbacks and misunderstandings.

The film evenings will begin on 22 August at Sõprus Cinema with a 2019 documentary That Pärt Feeling – The Universe of Arvo Pärt directed by Dutchman Paul Hegeman. The film takes a look at Arvo Pärt’s rehearsals with the Cello Octet Amsterdam and also features several conductors, interpreters and other creators of art trying to decode Arvo Pärt’s universe of sound. The film has already been screened at several international festivals and is now being brought to Estonian audiences for the first time. Naturally, the soundtrack of the film features many of Arvo Pärt’s works, including Tabula rasa, Summa, Fratres, Solfeggio, Für Alina, Da pacem Domine, Kanon pokajanen, The Deer’s Cry, Trivium, Symphony No. 3, La Sindone, Sieben Magnificat-Antiphonen and My Heart’s in the Highlands. That Pärt Feeling – The Universe of Arvo Pärt will be screened on 22 August at 6:30pm at Sõprus Cinema and on 25 August at 3pm at the Arvo Pärt Centre. Also present at both screenings will be the director of the film, Paul Hegeman.

Among the people interpreting Pärt’s music in the opening film is the French-Senegalise film director Alain Gomis, whose 2017 feature film Félicité will be screened at Sõprus Cinema on 23 August at 6:30pm. Félicité won the Silver Bear Award from the jury at the Berlinale Film Festival and has received numerous other commendations since. Gomis has filmed the Orchestre Symphonique Kimbanguiste, an orchestra of enthusiasts in Kinshasa, the capital of the Democratic Republic of the Congo, performing Pärt’s music with great dedication according to their abilities. This inevitably causes the viewer to reflect on musical interpretation as well as the right of amateur music enthusiasts to play music close to their hearts. Besides enthralling African rhythms, the soundtrack of the film also features long passages of Pärt’s Fratres, Sieben Magnificat-Antiphonen and My Heart’s in the Highlands.

The courage to think and dream differently – and think and dream big – while also staying true to yourself is also the focus of General Magic produced in 2018 and released this year. This is a story about General Magic, a company praised by Apple veteran John Sculley as the most important company in Silicon Valley that no-one has ever heard of. The documentary by Sarah Kerruish and Matt Maude takes us to the United States a few decades ago, to Silicon Valley brimming with creativity, and introduces a group of engineers and dreamers whose countless hours of work could not save that particular company from bankruptcy, but who provided humankind with many new technological means of communication that are self-evident today. During one of its breakthrough moments, General Magic features a passage of several minutes of Fratres for cello and piano. The documentary General Magic will be screened on 24 August at 6:30pm at Sõprus Cinema.

The artistic director of the film evenings is Kaarel Kuurmaa. The films are screened with Estonian subtitles; tickets are available at Piletilevi and Sõprus Cinema. 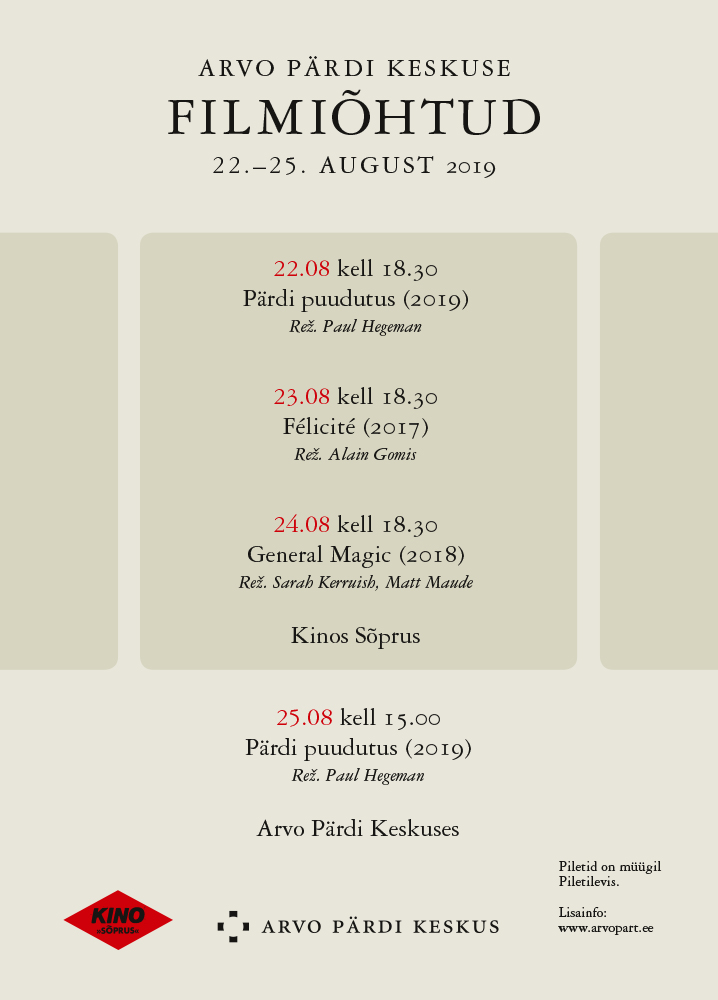