On February 27 at 17:00 in St. John’s Church in Tallinn, the “Author’s Hour” dedicated to Arvo Pärt’s music will begin. At this concert, for the first time in Estonia, Pärt’s choral work O Holy Father Nicholas, dedicated to the opening of the St. Nicholas Church, erected on the site of the destroyed twin towers in New York, will be performed. The concert will be conducted by Tõnu Kaljuste.

According to Tõnu Kaljuste, this “Author’s Hour” is all about the music of Arvo Pärt. Soprano Marie Listra, the Estonian Philharmonic Chamber Choir and the Tallinn Chamber Orchestra will perform works that Pärt dedicated to saints.

Arvo Pärt’s a cappella choral work, O Holy Father Nicholas, was composed for the opening of the St. Nicholas Greek Orthodox Church and National Shrine at the World Trade Centre Ground Zero site. St. Nicholas Church was completely destroyed during the terrorist attacks of September 11, 2001. The new church, opening two decades later in the immediate vicinity of the original location, is not meant to be an Orthodox church only, but will serve as a National Shrine open to pilgrims from all confessions from all around the world. The church was designed by the Spanish architect Santiago Calatrava Valls.

The new choral work (lasting ca. 15 minutes) is based on the English prayer text from the Orthodox liturgy, taken from the troparion of the feast day of Saint Nicholas the Wonderworker. Arvo Pärt has used the same text before – in the third part of his choral work Triodion and in Russian in Alleluia-Tropus, a work written for vocal ensemble.

“Many of Pärt’s works are dedicated to saints, so we wanted this to be reflected in the concert at St. John’s Church in Tallinn. In addition to the work dedicated to St. Nicholas, who is an important part of Christmas traditions and the patron saint of sailors, Pärt’s compositions dedicated to other saints will also be performed,” said Tõnu Kaljuste.

The Estonian Philharmonic Chamber Choir and the Tallinn Chamber Orchestra will also perform such works of Arvo Pärt as Silouan’s Song, Veni creator, L’abbé Agathon, Alleluia-Tropus and Adam’s Lament. Adam’s Lament is one of the most recognized works performed by Tõnu Kaljuste and his orchestras – in 2014, for example, it won the Grammy Award.

According to Mannfred Eicher, head of ECM Records, Tõnu Kaljuste and his orchestras are consummate connoisseurs of Pärt’s music. They have performed and popularized Pärt’s work on the world’s biggest stages, from Europe to Australia to North America. They have performed in such renowned venues as Carnegie Hall in New York, the Paris Philharmonic, the Elbphilharmonie in Hamburg, etc.

“Author’s Hour” is a new series of concerts under the artistic direction of Tõnu Kaljuste. 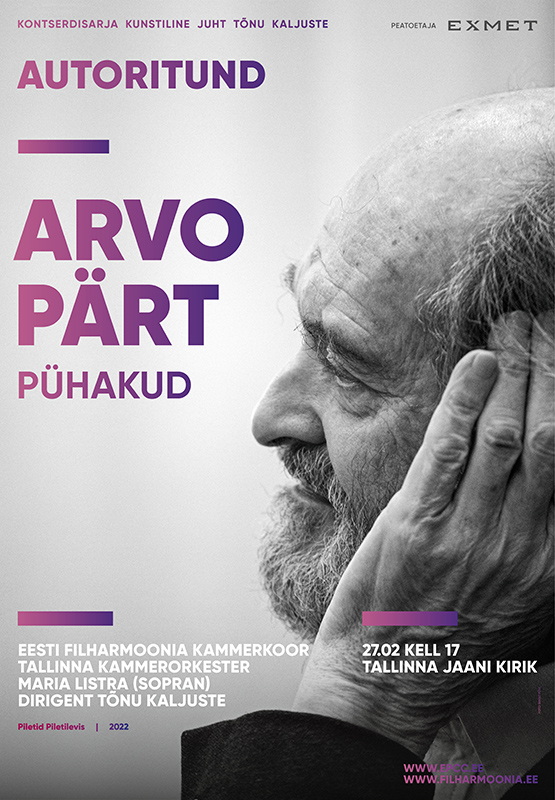