This year the 27th October marks the 40th anniversary of the concert that introduced the word “tintinnabuli” to the audience for the first time related to Arvo Pärt’s music. The Estonia Concert Hall in Tallinn hosted the ensemble Hortus Musicus, the Tallinn Chamber Choir and soloists in a concert where the first half featured Arvo Pärt’s cycle of works. The programme included an explanation of “Tintinnabuli”. The second half of the evening featured Hortus Musicus performing the 15th century five-part mass L’homme armé by Guillaume Dufay.

Two days before the Tallinn concert, on 25th October, Hortus Musicus performed almost the same programme in the main hall of the University of Tartu. The composer himself was not present and for this reason the concert is not considered the true première.

However, the first signs of the changes to come in Arvo Pärt’s music could be heard during that Tartu concert. The newspaper Edasi published a review on 5 November 1976 penned by Johannes Bleive. Bleive was of the old school, and before the war he had studied composing in Tartu under Heino Eller together with Eduard Tubin. He was already 77 and could not be regarded as a critic who favoured innovation. But Pärt’s new music clearly inspired him and he called the experience surprising, even though his first reaction at the concert was a feeling of unease. Bleive said that Pärt had turned “…to a completely new creative direction which appears to be a protest against the exceedingly dissonant and ubiquitous harsh music of our time, where there is no peace to enjoy simply the music of the instruments.”

The day of the concert, 27th October 1976, was a Wednesday, and the Estonia Concert Hall was not completely full, though four-fifths of the seats were taken. It was significantly more than usual for an average classical music concert at the time. As one reviewer pointed out later, the audience members were noticeably younger than the typical concert-goer.  Hortus Musicus had a magnetic effect on them, and most of the ensemble’s concerts were a success. But this time the music of Arvo Pärt also played a part in drawing them in. The resounding concert premières of the 1960s had become a kind of a legend among music enthusiasts, known outside of classical music circles as well.

By then, Hortus Musicus had been spinning on the philharmonic carousel of the national concert organisation for a few years already. They were young and long-haired, and they performed early music with as much zeal and energy as a rock band. In spring 1976, Andres Mustonen and the majority of the ensemble members graduated from the Tallinn State Conservatory, and they were employed by the Tallinn Philharmonic Society almost immediately. Hortus Musicus became a professional ensemble. The tintinnabuli concert was one of the first larger projects for this ensemble at the start of their professional career. Nora Pärt recalls Mustonen as an audacious young man at the time:  “He only got the pitches of certain notes from the composer, and nothing more, and the whole affair was like part of the process of creating a new work. Both the creator and the musicians had to dive into a new world, get used to it, understand it, decode it, work out what should stay and what should not. We were all ready for it to be a complete failure because our faith in it was very fragile. There was an urgent need for a real and audible experience and the evidence of new ideas, which were still in the process of being born.”

The composer’s own assessment of that event is rather modest, “There was like a favourable wind from the people who were around me. Starting with Alfred Schnittke, and of course Nora, and Andres Mustonen. And if thanks to the help and support – also moral support – of many people I was able to get a roof over some small tunes, we pitched a few tents there [at the concert], for Saara and some other pieces. That was it.”

Arvo Pärt describes the feeling before the concert as anticipation dangling on the hook of a question mark, with some hints of doubt, “We didn’t have a position. There was just a sort of a troubled feeling. Something was pulling us somewhere. There was a discovery, but we didn’t know what was behind it – we didn’t know yet what was what. We truly didn’t know if the child was a boy or a girl. It was completely uncharted territory. We had only one topic: can music like this exist at all? Does it even constitute anything? Does it hold itself together? Does it have a meaning? Does it have a form? Does it have substance? Only that.”

The opening piece of the concert was Calix, with the largest amount of performers, with Hortus Musicus joined by the chamber choir, Rolf Uusväli on the organ, and the bass guitar and the electric guitar whose amplified sound was heard over other performers, played by Priit Kuulberg and Ain Varts, whose names were not written on the programme. Pärt had already started writing this piece before the discovery of tintinnabuli, in the autumn of 1975, when there was a possibility in the air of performing it under the baton of Eri Klas at Estonia Concert Hall, with Alfred Schnittke’s Requiem. That was why there was such an unusual musical ensemble, as a rock band was included in the performance of Schnittke’s music. At the rehearsal, it was apparently namely Calix that was the most worrying. The composer thought that the performance was a failure, and he hid the score in the corner of a closet. It was performed once more with other tintinnabuli compositions at a concert by Hortus Musicus in Leningrad in January 1977, and that was it. But years later, Pärt blended Calix into his composition Miserere. Even the electric guitar part was retained.

Modus, whose original name – Sarah was ninety years old – was restored in the 1980s, was the longest composition performed during the concert, lasting more than fifteen minutes. In Soviet Estonia, performing a work with a biblical theme would have been riskier than waving a red flag in front of a bull, which is why the music was performed under a pseudonym. This composition also preceded the tintinnabuli style, and it was one of the toughest nuts to crack for the audience at this concert. The sound combinations and variations sounded like a crossword puzzle. Only very few people in the hall at the concert were aware at the time that the work had already been semi-secretly premièred in spring 1976 in Riga.

The organ piece Trivium was played by Rolf Uusväli, Arvo Pärt’s former colleague from his days at the radio, who was by then one of Estonia’s best-known organ soloists. Uusväli recalled later that the music inspired him a lot at the time, and he was memorably excited at the concert.

Arvo Pärt’s first tintinnabuli work Für Alina on Hortus Musicus’ historical instruments sounded very different from the piano version that is so well known today. The December issue of the newspaper Sirp ja Vasar carried a review of the tintinnabuli concert where Merike Vaitmaa suggested that Für Alina had already been played in the concert hall.

This concert on 27th October did not cause a sensation. Rather, it was a signal of Arvo Pärt’s change in musical direction and a signal of him having returned. In the radio programme Arvo Pärt 70, the musicologist Toomas Siitan, who was a music student at the time and who had attended the concert, summarised his impression that Pärt was searching, as were the musicians who played his music. “The works were so raw, even in the performance,” noted Siitan, “In the sense that nobody had yet heard how such music should be borne.”

But in hindsight, and in the light of what happened later, the tintinnabuli concert seems completely different. Now, it has become a significant event in music history, a milestone. Nora Pärt explains, “it was an experience for the composer, a real help in the birth of his new ideas and it gave him a strong impetus to move forward. The materials and ideas collected during the years were already threatening to explode. The searches that he had been carrying with him and that had until then only existed on paper finally found a physical expression, their own voice. Although it was still only experimental, it was a great release, a breakout from the blockage. In Arvo’s words it was all a great gift for him.”

At the Tallinn concert, the audience were given a programme which listed the names of the works and carried an explanatory text.  The text was written by Nora Pärt, who tried to give the listener an idea of the tintinnabuli world, as yet unknown to them, where the composer lived when he was writing the music. Among other things there were some extracts from Pärt’s thoughts written in his drafts and musical notebooks, whose spirit created the backdrop for the music, and belonged together with those sounds. “… relate carefully to each sound, word, work” showed the extreme concentration needed, while in 1975 the composer had written of the defining idea that led the search for unity behind his new musical thinking: “Each phrase breathes alone. Its inner pain and the solace of that pain make up its breathing when they are inextricably linked together.”

The programme had the following to say about the music heard at the concert “Clarity of hearing may be connected with balance, harmony and purity of categorisation, which is suggested by the general name for the Works Bells (Tintinnabuli). The author associates the natural beauty of the sound of bells with the idea of clarity of hearing and more specifically with triads. It is as if the composer is playing with the elements, freely assimilating them and bringing them closer to each other.”

The Estonian Radio did not organise a live broadcast of the tintinnabuli concert. While Arvo Pärt’s new musical world was opening up to the audience in Estonia Concert Hall, one piece at a time, the radio programme Kolmas programm (The Third Programme) was playing a tape titled George Harrison’s compositions. The symphony concert held on the following day, conducted by Neeme Järvi, was broadcast live on radio.

The recording of the tintinnabuli concert was only broadcast on radio in mid-December that year. A week after the concert, the radio programme Muusikaline Tund (Music Hour) discussed the event briefly, and played Calix, recorded in Estonia Concert Hall.

Arvo Pärt appeared briefly at the microphone to comment in Virve Normet’s radio programme Kontserdistuudio Retsensiooniklubi a few days after the concert, and among other things he noted that during such a concert there are three forces in the hall acting on the music: firstly the reactions of those who accept the music, secondly the reactions of those who reject it, and thirdly the interaction between these two reactions. Maybe something that is not directly contained in the music but that is in people and chimes with them.

Pärt left unsaid what the “something” is that chimes with people like a little bell, or tintinnabuli. Virve Normet later recalled that the composer asked not to play the majority of his explanations on air. In other words, speech may be silver, but silence is golden.

If music can speak to people, there is no need to interpret it. Forty years ago, nobody knew what they were dealing with. All they had was almost imperceptibly ringing hope. 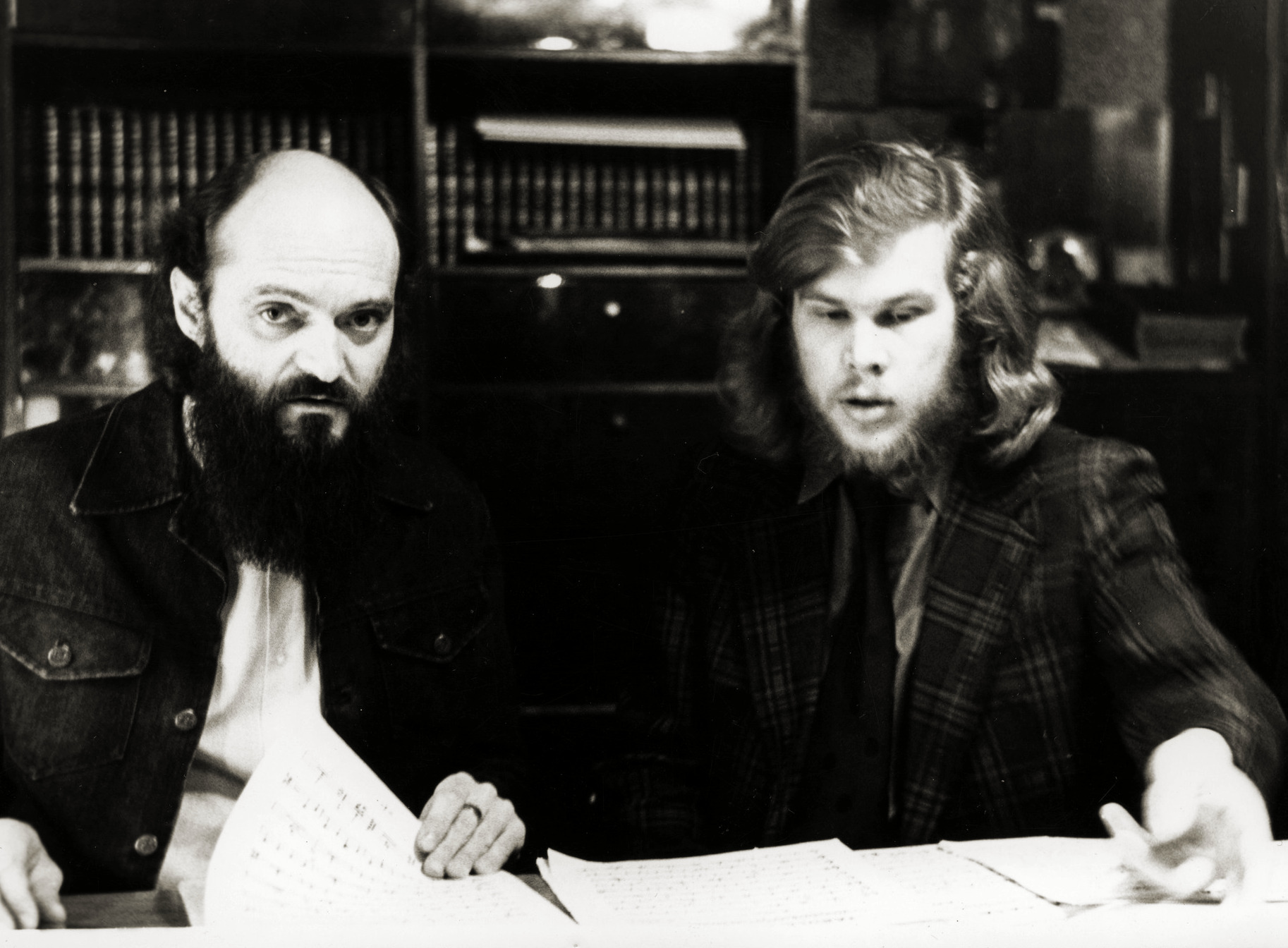