On 13 December 2013, fifty years passed since the premiere of Arvo Pärt’s “Perpetuum Mobile”.

The premiere concert of this short but significant piece in 1963 also took place on a Friday and was conducted by a 26-year old Neeme Järvi. The programme also included works by Mozart, Hindemith and Artur Kapp, and at the audience’s request “Perpetuum Mobile” was performed a second time.
At that time the composer was convinced that all mathematical formulae can be shaped musically relying on the serial compositional technique. Today this premiere can be considered crucial for the composer as well as for Estonian music in a wider sense, as it opened the door to a completely new sound in the world of composition. This particular work also introduced the message of Arvo Pärt internationally – it was already performed in 1964 on Luigi Nono’s initiative at the Venice Biennale and in 1965 also at the Warsaw Autumn festival.
Thanks to collaboration with the Estonian Theatre and Music Museum, there is now also a digital copy of the manuscript of “Perpetuum Mobile” in the archives of the Arvo Pärt Centre. 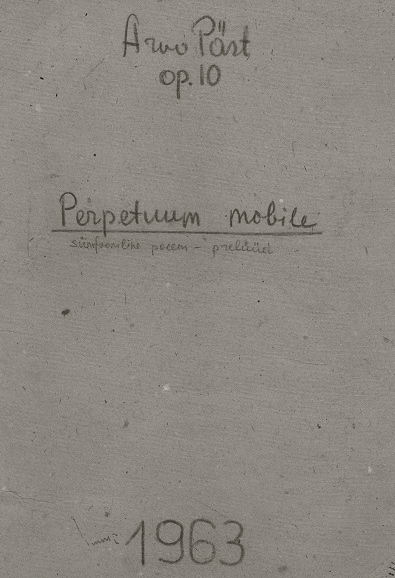