A DVD of Dorian Supin’s 2015 documentary Arvo Pärt – Even if I lose everything is now available.

Dorian Supin’s third documentary film of Arvo Pärt steps closer to the composer, showing him in a domestic setting as a composer, husband, father and grandfather. The title “Even if I lose everything” refers to an entry in Arvo Pärt’s musical notebooks, which the composer browses in the film, together with Immo Mihkelson. The musings and recollections inspired by the notes in these journals, in parallel with domestic scenes, shed light on the composer’s life and creative philosophy, painting a personal, in-depth picture of Arvo Pärt. The film’s soundtrack includes excerpts from Pärt’s works.

The film has been translated into nine languages: English, German, French, Spanish, Italian, Finnish, Russian, Japanese and Estonian. An English-language booklet is included with the DVD, containing introductory texts by music journalist Immo Mihkelson, musicologist Toomas Siitan, and the director Dorian Supin. The DVD also includes English translations of the texts that form the basis of the music featured in the film. The booklet is illustrated with stills from the film and the sleeve was designed by Kalle Toompere.

In Estonia, more than 5,000 cinema-goers went to see screenings of the film Arvo Pärt – Even if I lose everything. That makes it last year’s most viewed documentary distributed in Estonia. The film was screened in more than 60 locations across Estonia, and was also shown on Estonian television and the online cinema of the Postimees newspaper.This documentary has also been warmly received at several film festivals. The film was screened at the German “Nordische Filmtage Lübeck”, and at “DocPoint”, a documentary film festival in Helsinki. Furthermore, Arvo Pärt – Even if I lose everything has been included in the programme of the largest festival of music films in Asia – the Jecheon International Music and Film Festival. This festival will be held in Jecheon, South Korea, in August this year.

The film was produced by the Minor Film studio in collaboration with the Arvo Pärt Centre, UE and ECM Records.
The DVD can be ordered from the Arvo Pärt Centre online store at www.arvopart.ee or by e-mailing: info (at) arvopart.ee. The price of the DVD is 17 Euros, and is available in PAL and NTSC.

Read more about the film 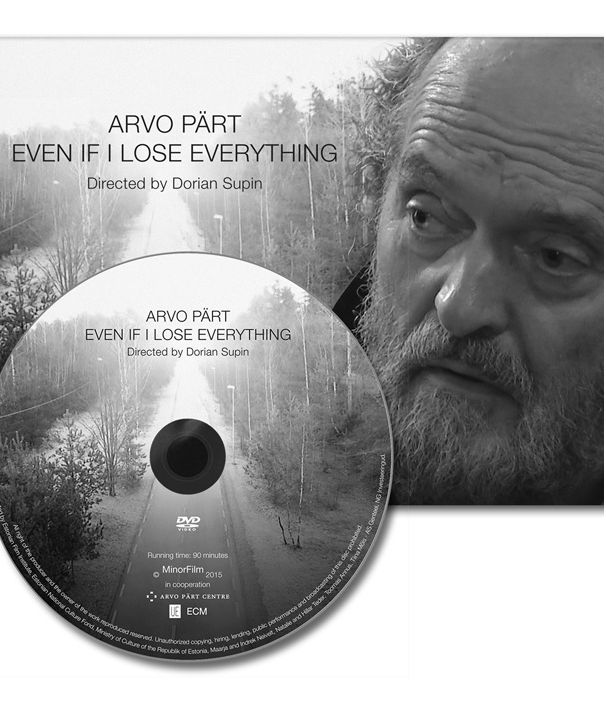