German cellist Anja Lechner and Argentinean guitar player Pablo Márquez have been making music together for years. Their concert programmes are characterised by a sense of searching and they often include new works for guitar and cello in their repertoire. This programme, titled Night, was born out of a shared love for Franz Schubert’s music and Lieder. In November 2018, Lechner and Márquez also released an album of the same name under the ECM record label.

The inspirational collaboration between these two musicians sharing similar sensibilities began in 2003 at a music festival in the Royaumont Abbey near Paris. Besides their love for music from different cultures, the versatile interpreters also have a common desire to discover new soundscapes. Lechner and Márquez often perform their own arrangements and have also premiered many works, thus expanding the repertoire for cello and guitar.

In the 19th century, it was a widespread tradition to accompany songs on the guitar. More than thirty songs by Franz Schubert, including Night and Dreams (Nacht und Träume), were published with guitar accompaniment during his lifetime. All the songs to be performed at this concert – with the exception of The Hurdy-Gurdy Man (Der Leiermann, D 911) and the romance from Rosamunde (Romanze aus Rosamunde) arranged by Anja Lechner and Pablo Márquez – are from a manuscript by Franz Xaver Schlechta von Wschehrd, who was among Franz Schubert’s closest friends.

The central piece in this concert’s programme, Sonata in A minor, D 821, is named after the arpeggione, an instrument largely forgotten today. This rare instrument has also been called guitar d’amour or bow guitar. The “Arpeggione Sonata” is mostly played on cello, while the lightly floating piano part is also perfectly suited to the guitar. The dialogue between the two instruments produces a sensitive and intimate sound.

The beautiful and melancholic nocturnes for cello and guitar by Friedrich Burgmüller (1806–1874) echoes the spirit of Franz Schubert’s music. 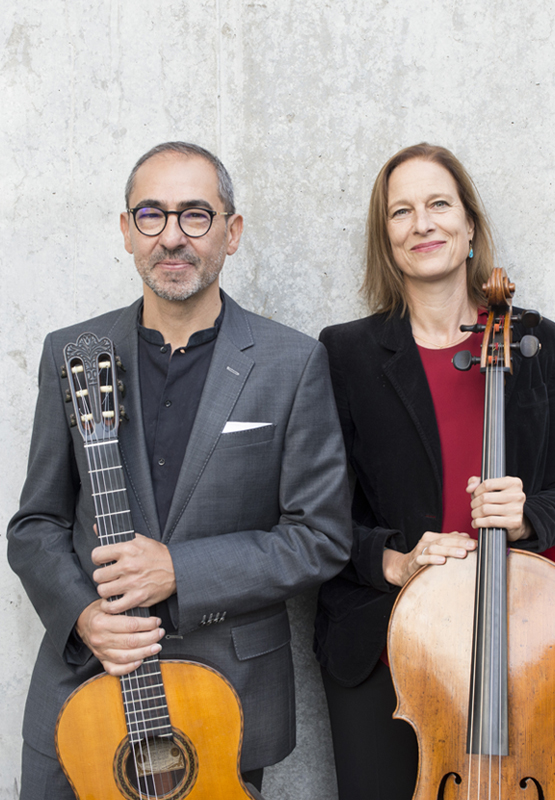