On 4 March an extraordinary event – the first meeting of Mikhail Khodorkovsky and Arvo Pärt – took place in Zürich.
The grand hall at Zürich Tonhalle witnessed a brilliant performance of Arvo Pärt’s Symphony No. 4 “Los Angeles” dedicated to Khodorkovsky by the Zürich Chamber Orchestra under the baton of Anu Tali.
When completing his symphony in 2008, the composer was not sure if he would ever be able to meet Khodorkovsky, then imprisoned in Siberia, and would the critic of the Kremlin himself have the chance to listen to the composition one day. Arvo Pärt wrote on the score of the symphony: “With my composition, I would like to reach out, extending a hand to the prisoner and in his person to all those imprisoned without rights in Russia. I dedicate my Fourth Symphony to Mikhail Khodorkovsky, wishing him peace of soul notwithstanding the circumstances in which he finds himself; anything more is beyond my power. I do not know whether he will ever be able to hear the composition. Nevertheless, I hope that my carrier pigeon does reach faraway Siberia one day.”
On 4 March in Zürich it became true – the carrier pigeon reached its address.
Along with Pärt’s symphony the concert also featured an orchestral work “Elegies of Thule” by Tõnu Kõrvits and a transcription for trumpet from the Cello concerto No. 1 by Josef Haydn performed by legendary trumpet player Sergei Nakariakov. Moritz Reissenberger, member of the artistic board of the orchestra, had the idea to hold this concert back in December 2013 shortly after the unexpected liberation of Khodorkovsky having noticed the personal dedication to Khodorkovsky in the score of the symphony.
At the end of the concert, when Pärt was standing on stage, Pärt being greeted by warm applause from the audience, he then bowed to Khodorkovsky, who was sitting among the audience, as if being finally able to deliver him the message in person. 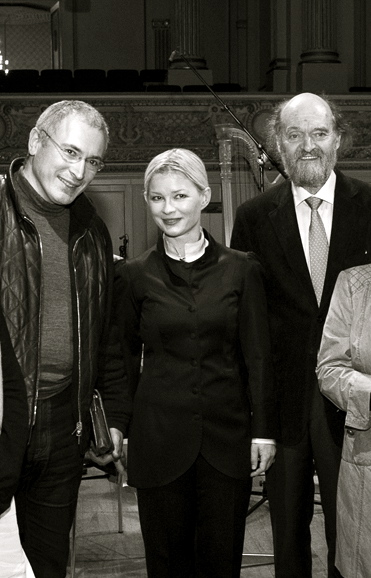