“Arvo Pärt: Sounding the Sacred” is an international conference within the Arvo Pärt Project at St. Vladimir’s Seminary, in collaboration with the Orthodox Christian Studies Center of Fordham University. The conference is being held on 1–4 May 2017 in New York City and focuses on the sonic and spiritual effect of Arvo Pärt’s music. The conference will host speakers from different fields of research with presentations based on sound studies, a relatively new branch of academic inquiry.

Sacred or spiritual realities always come to us in an embodied form – through words, movement, paintings, architecture, etc., and of course music. All these are physical things. Music, fundamentally, is sound, which is the movement of air and its impression on the human body.

Typical musicological conferences, especially when focusing on a composer, will often take the form of “life and works” – a survey of the composer’s biography and an analysis of his/her compositions. There have been several conferences on Arvo’s music as well as fine studies presented in written form that have already taken such an approach; likewise, there have been several excellent studies of tintinnabuli.

Our conference focuses on sound. As Arvo has said – “Sound is my word.” Sound is also the basic datum that reaches the hearer. So, when we look at these components that we’ve all been reading and writing about in Arvo’s music (melody+triad, silence, word, etc.), we want to ask: “How do these actually operate to produce their effect on the person?” This conference is multidisciplinary in its approach. We have among our speakers architects, medievalists, musicologists, theologians, performers, cultural historians — and some speakers versed in more than one of these disciplines. And that is because suddenly all of these areas have become relevant. The emerging academic field of “sound studies” is by nature a “collage discipline” incorporating insights and discourses from all these different areas.

The conference will host presentations by researchers who have had a long-term connection with Arvo Pärt’s music, as well as speakers with completely new approaches. Among the principal speakers is Peter Bouteneff with inaugural lecture “Sounding the Sacred”; Andrew Albin compares the aspirations of Pärt and the 14th century composer Richard Rolle in attaining silence through music; Jeffers Engelhardt too discusses the phenomenon of silence and resonance in his presentation; Kevin Karnes recalls the Riga Contemporary Music Festival in 1976 and 1977, where Sarah was Ninety Years Old and Missa Syllabica were performed; Alexander Lingas, leader of Cappella Romana, aims to prove that connections between Pärt’s music and Christian liturgical chant (both Eastern Orthodox and Western) can be found at an even more fundamental level than in direct quotations; Ivan Moody in his presentation discusses works by Pärt that may be associated with Eastern Orthodox Christian theology; Bissera Pentcheva takes architecture as the starting point in her presentation, focusing on voice and icon in the Hagia Sophia basilica; Robert Saler focuses on theological implications of studying Pärt through the lens of “sound studies”; Toomas Siitan’s presentation emphasizes a common characteristic of Pärt’s earlier and tintinnabuli music – the search for a solid yet simple structural anchor; and Sevin Yaraman draws parallels between Pärt and Sufi music. Speakers at the conference also include Paul Hillier (via a filmed interview with Bouteneff) and the event will host a panel discussion of performers of Pärt’s work. There will be 10 additional papers delivered at the conference, chosen out of 20 proposals received from around the world. On opening day His Beatitude, Metropolitan Tikhon honours the conference with the speech.

The conference is accompanied by a concert in the nearby Holy Trinity Church, where Arvo Pärt’s Stabat Mater, Trivium, De profundis, and Sarah was Ninety Years Old will be performed by The Goeyvaerts String Trio+ with Andrew Shenton on organ and Yousif Sheronick on percussion.

Further information and the programme for “Sounding the Sacred”: http://soundingthesacred.com 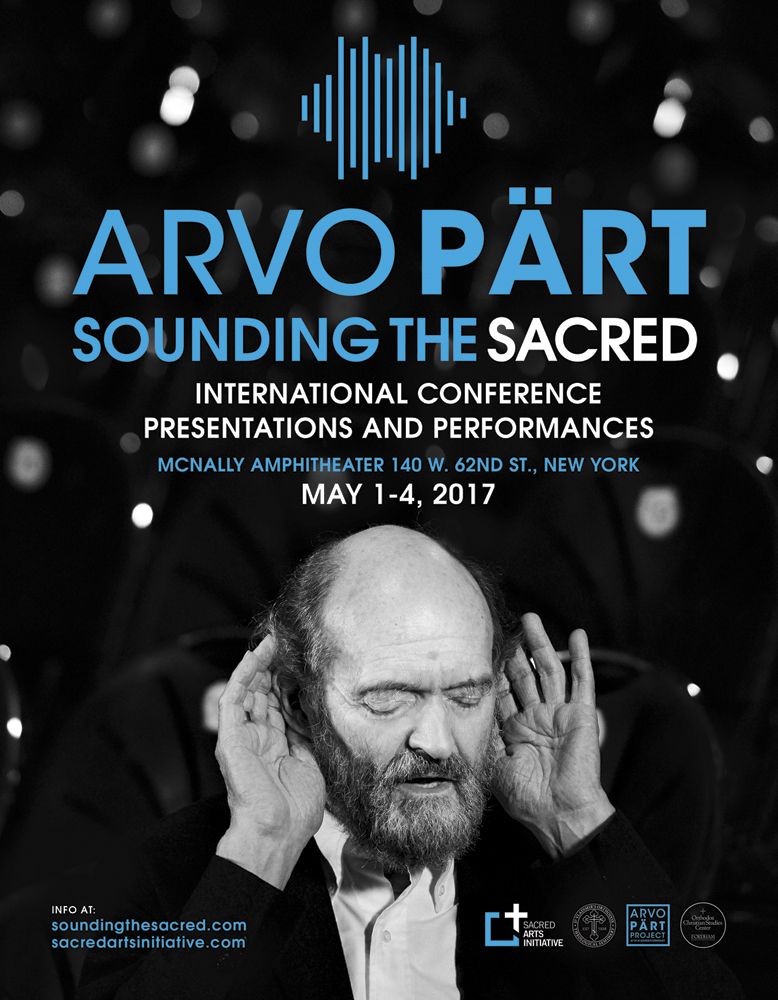