In 2014, Arvo Pärt was in focus at Mozart Week between January 24 and February 2. His music was performed at six concerts, and the world premiere of “Swan Song” was presented by the Vienna Philharmonic. In collaboration with the Arvo Pärt Centre, an exhibition of photographs by Kaupo Kikkas from the recording sessions of “Adam’s Lament”, a recent Grammy Award winning album under ECM, was on view for audiences in the great hall of the Mozarteum.

In Salzburg, Arvo and Nora also visited the archive and library of the Stiftung Mozarteum with special interest in the organization from the perspective of the establishment of their own archive at the Arvo Pärt Centre. As a gesture of appreciation, Arvo Pärt presented a facsimile of his “Mozart-Adagio” to the general manager of the Mozarteum, Matthias Schulz, for inclusion in their archive.

The “Mozart-Adagio” for violin, cello and piano (1992) was composed in memory of Arvo Pärt’s friend and well-known Mozart-interpreter, violinist Oleg Kagan (1946–1990). It is based on the second movement of W. A. Mozart’s piano sonata in F-major, KV 189 (280), which was set for a piano trio – an instrumentation that was significant for Oleg Kagan’s performances with the pianist Svjatoslav Richer and his cellist wife, Natalja Gutman. The piece was composed for the Helsinki festival “Helsingin juhlaviikot” and the premiere took place on 6 September 1992 with the well-known American chamber ensemble, the Kalichstein-Laredo-Robinson Trio. 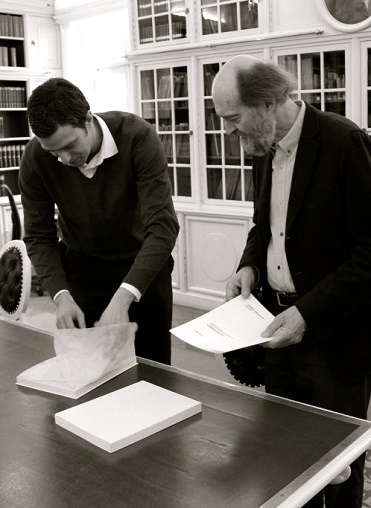