Triin Ojari’s interview with Enrique Sobejano, the architect of the Arvo Pärt Centre.

The current quiet period of introspection is the perfect time to pick up the book published by the Arvo Pärt Centre at the end of last year showcasing their building. Designed by the Spanish architecture firm Nieto Sobejano, the building in Laulasmaa is one of the most special in contemporary Estonian architecture, simultaneously intimate and sacred, a temple to music in the middle of a dense forest. This impressive book, designed by Angelika Schneider, clearly conveys an overarching spirituality: in the book, you can find a many-layered playful interaction between architecture and music, where jumping from texts to photographs, then to sketches, drawings and sheet music creates a certain rhythm and an understanding of an impeccably well-honed, highly aestheticised whole. Neither music nor architecture can be translated into words, and trying to explain the forms and symbols of either can generally be tedious, so the book prefers to focus on what is really important. The book is about abstract concepts, such as beauty, faith, silence, space and sound, and how they help us be human.

On the publication of the book, I made a video call to Enrique Sobejano, who together with his wife Fuensanta Nieto won the Centre’s architectural competition in 2014, and for whom the building has been very special ever since.

The title of the book is Arvo Pärt Centre & Nieto Sobejano Arquitectos. A Common Denominator. Does this common denominator refer to the geometry that you say combines nature and architecture in this project?

The title did not come directly from us, but emerged through discussions with everyone involved in making the book. The book combines different art forms: architecture, music and landscape, and of course their common denominator can be understood in various ways: geometry, mathematics, harmony etc. There are many denominators. The title plays with the connection between architecture and music, which has its own extensive history.

This connection is also strongly emphasised in the texts and in the design of the book. Photographs and articles alternate with the sheet music of Arvo Pärt’s In Principio and the architectural drawings of the building printed on tracing paper. In your text, you talk about how sound becomes space, which is one of the principal ideas of the book. Maybe you could briefly describe this idea?

Of course, everyone interprets it differently, but for us, it’s a very personal thing. With this project, the question for us was how to interpret one art form into another language, with other tools. Can sound be translated into space? Can sheet music be translated into an architectural drawing? Can silence be interpreted as a void? Architecture is usually defined as the creation of space, while time is important in music. We were interested in reversing this definition: how could the dimension of time be expressed in architecture, and space in music? Of course, the connection between architecture and music can be observed very directly, for example in the design of concert halls, where the design affects the sound quality, as well as in cathedrals etc. Instead of this rather technical interpretation, we were interested in a more personal approach: how a piece of music can reflect space. While we were working on the competition project, we listened to Tabula rasa a lot, and it eventually became the keyword of our work.

Is there music in each one of your projects?

It is more of a feature of this building in particular. However, in our work, we have always been interested in geometry and combinatorial thinking: how to achieve a complex system by combining pure elements, how to create plurality, diversity, in an architectural space following certain rules. It is also one way of describing the connection between music and architecture, and this aspect became important in this project: variations on one theme. For example, the main theme in the Contemporary Art Centre in Córdoba is a hexagon, associated with Arabic architecture typical of southern Spain, while the Pärt Centre is based on the shape of an equilateral pentagon. Creating architecture is based on logic and intuition, and how these are intertwined. I may try, but I cannot explain the process in words.

The book is also divided into five alternating parts, just like the geometry of the Pärt Centre building is based on a pentagon. A coincidence?

Not a coincidence. This book is completely different to the project, as it was completed after a long process of design and construction, when everything was ready. In that sense, the book is less intuitive and more constructed, a summary of what happened over the years. It is by no means just our book: it was born in dialogue with many people, especially with Michael Pärt, and of course Arvo and Nora Pärt. So when we started working on the book, we had many different components and we needed a structure; we chose the number five. Five parts that form one whole. This book contains Arvo Pärt’s thoughts and quotations, photographs, architectural drawings, sheet music and, finally, texts.

The book also includes architectural drawings and sheet music printed on tracing paper, forming a translucent layered structure when bound together. The comparison of the two languages is quite direct here.

This idea came about quite by accident, while working at the office, when the drawings and the sheet music were haphazardly piled together on a desk. We were truly fascinated by the apparent overlap of two different languages, by how visual connections are made!

By the way, do you still use tracing paper in your office?

Yes, I do sketches on tracing paper. Fortunately, not all creative processes have become completely digital… I remember using architectural drawings done on tracing paper to position the building with Arvo, adjusting everything layer by layer.

The Arvo Pärt Centre also contains a strong religious dimension, as it even has a separate Orthodox chapel, but the building as a whole, with its picturesque views of the forest, has a certain reverence for nature, which is a sort of a sanctuary for Estonians. We’re not really churchgoers, but we still need somewhere peaceful to go. When you were designing the building, how much did you focus on it as a kind of a place of worship?

As for the chapel, it was quite an intriguing element for us. When we started working on this project, we had to address a number of logical requirements: a concert hall, offices, a library etc. But there were two separate requirements that emerged: a tower and an Orthodox chapel. Such unexpected elements may eventually have become the most important ones because we needed to understand them and make them part of the architecture. We came around to the idea of the tower quite quickly: a symbolic place whose sole purpose is to offer beautiful views, which we integrated painlessly into the geometry of the building. It was a bit more complicated with the chapel: it was supposed to be a classic Greek chapel, and at one point, we were ready to make a replica of an existing chapel or build it somewhere in the forest, away from the main building. However, the Pärt family wished to integrate the chapel with the main building, and so we came to the existing solution, an abstract shape of a chapel made from concrete, and much more monumental than the rest of the building, firmly grounded, so to speak. A narrative, a story, is always very important in architecture, and that is how we explained it to ourselves and the client: concrete was not used anywhere else in the building, so we can imagine that an old chapel existed already before we created the building around it!

I saw on your website that you are designing at least a dozen new buildings all over Europe and China this year: your company seems to be doing very well!

Indeed, we have won many interesting competitions since completing the Arvo Pärt Centre. We are currently involved with the construction of the archives for the Marzona private collection of avant-garde art in Dresden, as well as the Archaeological Museum in Munich, and we will be designing the Carmen Thyssen Museum in an old convent in Catalonia. We will probably have to hire more people for our Berlin office.

With the pandemic, there has been more attention focused on our dwellings, the quality of our homes, as well as the changed nature of offices, for example. Has the virus affected your work in any way?

Certainly, people have started to realise that their places of residence are more important than they previously thought. In the Nordic countries, where people spend a lot of time at home for many months of the year, and where dwellings are therefore more important, the situation is probably diferent, but in southern countries, such as Spain, people spend a lot of their time outdoors, in cafes and on the streets. Before, many people didn’t care at all how spacious or bright their homes were. I believe that now, when a lot of people are working remotely, it has become clear that the quality of a space and the work of an architect are important, and that a suitably-sized and properly oriented window can save the day.

The interview was first published on 19 January 2021 in the newspaper Postimees. 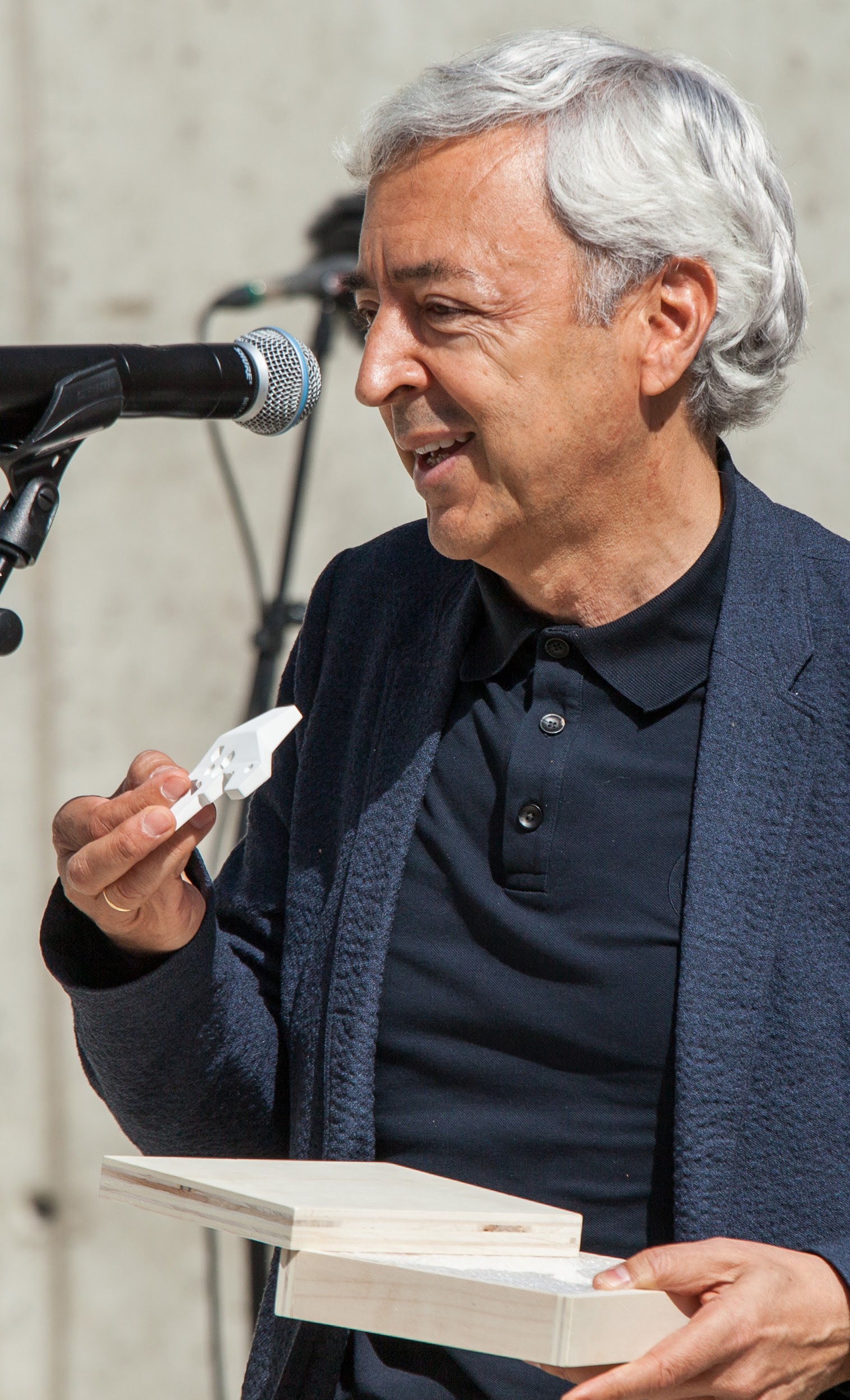