In connection with the upcoming composer’s concert series in the USA at the end of May, the Arvo Pärt Centre was visited on 14 March by Dr. Peter C. Bouteneff and Dr. Nicholas Reeves from St. Vladimir’s Orthodox Theological Seminary.

As faculty members at the seminary, Bouteneff and Reeves have for years committed themselves to researching and introducing Arvo Pärt’s music. The closer collaboration began in 2011, when St. Vladimir’s representatives visited the APC for the first time. The current visit involved discussing the final details of the US concerts, which have been a long time in planning and preparation. Tallinn Chamber Orchestra along with the Estonian Philharmonic Chamber Choir will perform “Adam’s Lament” at the prestigious Carnegie Hall under the baton of Tõnu Kaljuste as well as presenting the entire programme off the Grammy Award winning “Adam’s Lament” CD. The EPCC will also perform “Kanon Pokajanen” at the Metropolitan Hall. In addition, they will give concerts at the John F. Kennedy Center and the Phillips Collection Hall in Washington. During the current visit Peter Bouteneff also met representatives of the Ministries of Culture and Foreign Affairs, who are important partners in organizing the concert tour. The concerts will be attended by the composer himself, who previously visited New York more than 30 years ago. During his US tour, Arvo Pärt will also visit the Robert Wilson Center in Long Island.
St. Vladimir’s Orthodox Theological Seminary, founded in 1938 and located close to New York, is an institution committed to introducing Orthodox Christianity in the western world. The connections between the Pärt family and Peter Bouteneff were established in the 1990s in relation with the Monastery of St John the Baptist in Essex and Archimandrite Sophrony. The “Arvo Pärt Project” was created in 2012 under the auspices of St. Valdimir’s with the aim of researching connections between the religious roots and creative process of Pärt’s work in order to introduce it to wider audiences. 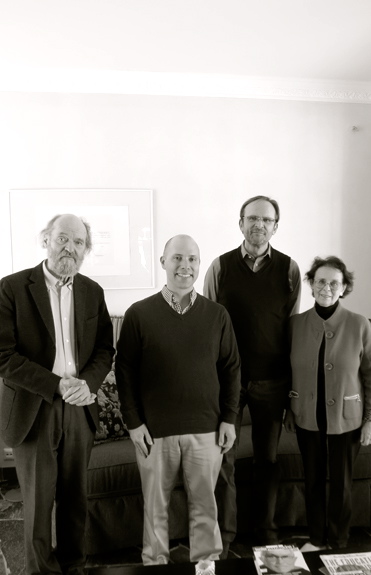