The concerts with Arvo Pärt’s music in United States performed by Estonian Philharmonic Chamber Choir, Tallinn Chamber Orchestra and conductor Tõnu Kaljuste found extensive media coverage both in Estonia and in US. Already before the concerts, which took place from May 27 until June 2 in Washington and New York, major articles were published in New York Times, Washington Post and Wall Street Journal, containing also the interviews with Arvo Pärt.
The main newspapers in US as well as many other magazines and online-editions ran their reviews, all recognising Arvo Pärt as one of the most unique and most beloved classical musical composer in the world and praising the musicians’ and Kaljuste’s excellent performance.

Here are some excerpts of the reviews.

A remarkable free concert of Pärt’s music at the Kennedy Center Concert Hall Tuesday night made everyone in the concert hall certainly stop, listen and marvel.
*
It does not happen every day that an audience gets to hear such stunning performances — by, in this case, the Estonian Philharmonic Chamber Choir and the Tallinn Chamber Orchestra, under founder Tonu Kaljuste — of such strong music.
Anne Midgette, Washington Post, 29.05

The remarkable Estonian composer Arvo Pärt — whose spare and almost mystical music has been embraced by an audience far beyond the usual classical circles — has had a triumphant run in Washington this week. After a hugely successful concert of orchestral and choral works at the Kennedy Center on Tuesday, Pärt returned on Thursday to the Phillips Collection for a more intimate performance of his chamber music — nearly a dozen works that, despite their modest size, seemed to evoke the same aura of quiet majesty, the same sense of austere spirituality, and the same purity of expression as his large-scale music.
*
In „Für Alina,” for example, he built a sense of limitless, light-filled space with only the simplest of musical materials, and in every work on the program he seemed to find a universe in even the smallest grain of musical sand.
*
Less-familiar pieces such as „Mozart-Adagio” — a stunning arrangement of the second movement of Mozart’s piano sonata in F Major, K. 280 — and the relatively dark and dissonant „Es sang vor langen jahren,” showed off aspects of Pärt’s musical personality that only deepened the interest of his music.
Stephen Brookes, Washington Post, 30.05

„Fratres“ has been arranged in many different ways, and rather than diluting the music, each arrangement has made the piece stronger, revealing facet after facet.
Traksmann jumped off the hypnotic arpeggiations with an intensity that almost had the bow flying out of his hand. But the music, and Kaljuste’s quietly commanding, minimal conducting kept him together, and was elegant, with a deeply felt core of strength.
*
This is not the only group that plays Pärt’s music, but they are the only one that can maintain a blade-like precision and strength of intonation that seems to carry the resonance of a church with it, even in the mellow acoustics of Carnegie.
*
In the secular concert hall, the simple beauty and feeling of settings like „My soul wearies for the Lord” is still powerful, especially with such affecting, illuminating singing. The austere structural means of „Salve Regina“ had a sublime expression. Where comparable settings like Josquin’s mostly affect the untrained ear, it’s easy to hear how Pärt’s moving pieces come together into a whole, and, like Stravinsky’s neo-classical music, this is a great intellectual and aesthetic virtue.
*
The Estonian composer’s music tends to be beautiful, but the nature of that beauty matters. His sound world is austere, slightly hermetic, rigorously made, and he never panders. The style is called „tintinnabuli”—little bells—which is evocative but misleading. The ubiquitous sound he creates is etched, hard, like a cut diamond. His music rings but with an edge.
*
One needn’t be Orthodox, or have any kind of faith, to hear the beauty that faith can give through those that do believe.
George Grella, New York Classical Review, 1.06

The evening opened with two early examples of these from „Tabula Rasa,” the 1984 ECM recording that brought Mr. Pärt international fame: the lightly pulsating „Fratres,” in a version for violin, string orchestra and percussion, with Harry Traksmann ably performing the solo part, and the elegiac „Cantus in Memory of Benjamin Britten.” The Tallinn Chamber Orchestra, conducted with authority and grace by Tonu Kaljuste, brought out the clarity of the harmonic progressions in these deceptively simple pieces, as well as the gradual buildup of sonic texture and emotional weight that makes them so riveting.

The singers sat in a circle, rendering the work [„Kanon pokajanen“] with a power and purity of tone that fully revealed its mystical, serene qualities. Throughout, the choir [Estonian Philharmonic Chamber Choir] vividly illuminated the various choral timbres of the piece, which range from the robust, full choral sound of the opening to plaintive interludes featuring the resonant low male voices or the whisper of the upper voices alone.
Vivien Schweitzer, New York Times, 3.06 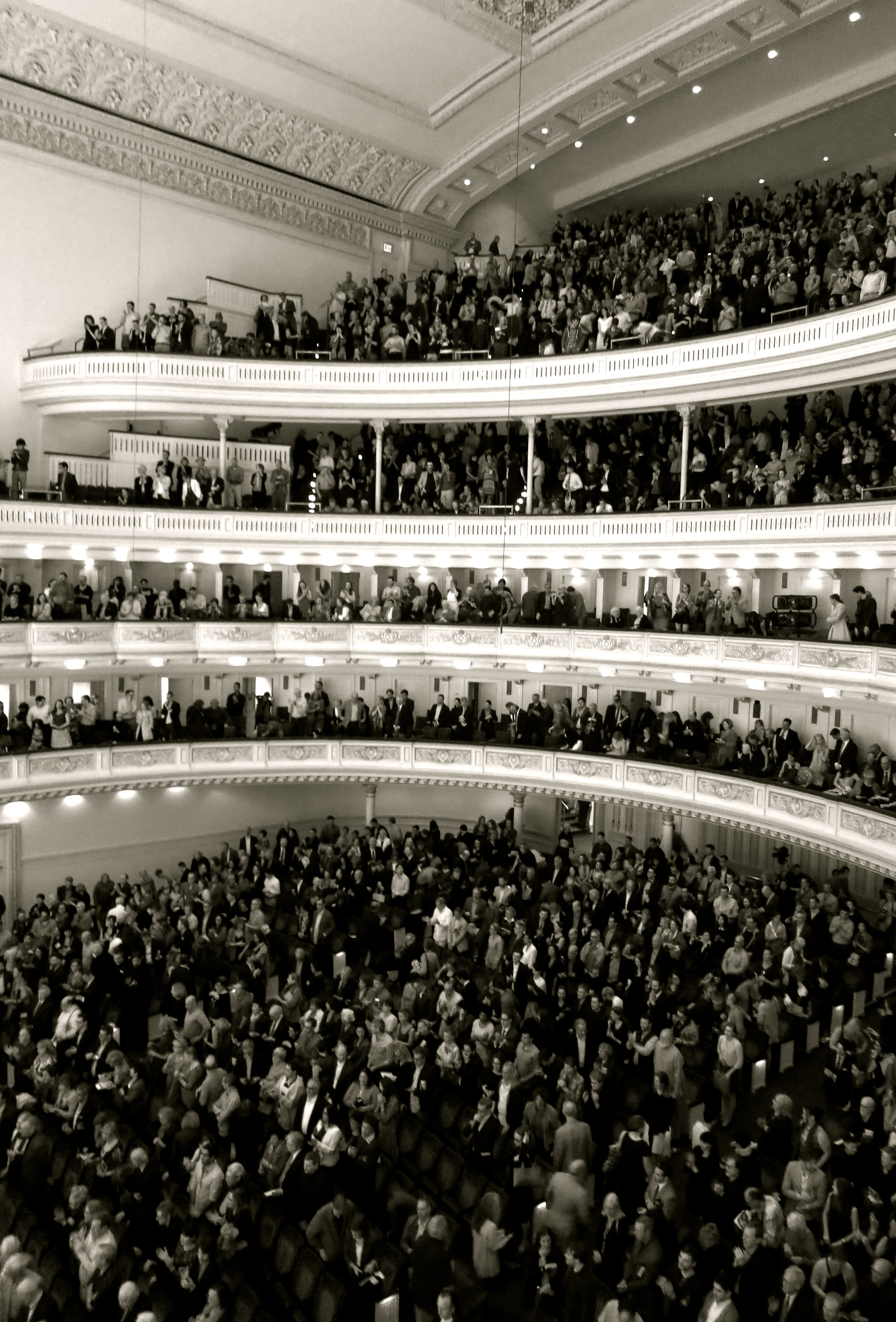