Universal Edition, the main publishing company for Pärt’s works, has been publishing a new online magazine, MusikSalon, since early 2015, replacing the long-established print magazine Musikblätter. The entire third issue of this new publication has been dedicated to Arvo Pärt, containing carefully chosen texts, including interviews with the composer’s most important contemporaries.

In the foreword to this issue of MusikSalon, the editor Eric Marinitsch notes that much like the composer, who likes to stay in the shadow of his music, MusikSalon will also focus not on Pärt as a person, but, above all, his works.

The composer’s long-term collaboration partners Manfred Eicher, Tõnu Kaljuste, Paul Hillier and David James share their experiences regarding the interpretation and recording of Pärt’s music. In his essay, the music journalist Michael Stallknecht ponders Pärt’s anti-romantic approach towards his work and religion. The director, Dorian Supin, of the recently premièred documentary “Arvo Pärt – isegi kui ma kõik kaotan” (“Arvo Pärt – even if I lose everything”) has also given an interview to MusikSalon.

A longer article is dedicated to the collaborative project “Lapsepõlve lood” (“Songs from Childhood”) between the Arvo Pärt Centre, Estonian Public Broadcasting and the publishing company Universal Edition, which will include the release of a CD with Pärt’s children’s music from 1956–1970. Sheet music for these songs will also be published in Estonian, English and German, for piano accompaniment and ensemble accompaniment. This is an extensive archive project for the Centre, as a result of which several songs will be printed and recorded for the first time.

In addition to the new articles in this content-rich edition, readers can also enjoy an extensive fragment of the Italian musicologist Enzo Restagno’s interview with Arvo and Nora Pärt. This conversation, which took place in 2004, touches upon the most important and deepest topics in Arvo Pärt’s life and work, and the interview, which has by now been published in many languages (Italian, Estonian, German, English, French, Russian), has definitely become one of the core texts for understanding Pärt’s creative work.

Together with the ample selection of photographic, audio and video material, MusikSalon is a quality read for any follower of Arvo Pärt’s music, and a nice tribute by the composer’s long-term publisher for his 80th birthday. 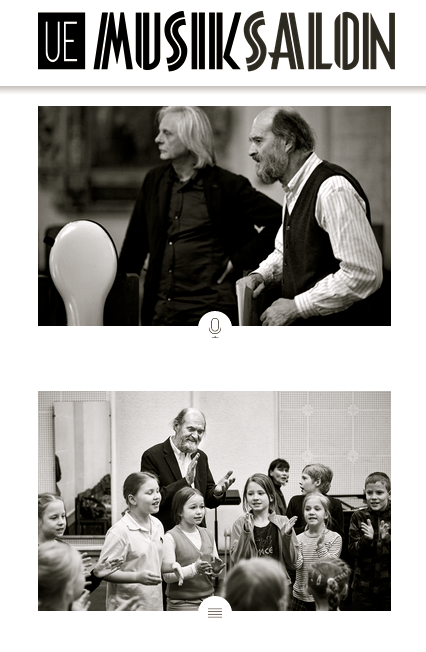