From 20 October until 18 November, the Music Department gallery in the Tartu Public Library will host an exhibition of photographs by Tõnu Tormis, “On Pärt”. Displaying this exhibition from 2005 is possible thanks to collaboration between Tartu Public Library, Tõnu Tormis and the Arvo Pärt Centre Another display on the composer, “Enchanted By the Work of Arvo Pärt”, will be open outside the Music Department on the 4th floor.

“As a long-standing singer in the Estonian Philharmonic Chamber Choir, I’ve had many pleasant encounters with Arvo Pärt over the years, both in rehearsals and concerts, as well as during album recordings. This has enabled me to observe him through my camera in situations that would otherwise have been inaccessible for me,” said Tõnu Tormis.

The exhibition consists of 30 photographs, mounted behind glass, depicting the composer Arvo Pärt from 1978 to 2005. In 2016, Tõnu Tormis presented the photographic exhibition to the Arvo Pärt Centre.

Among the photographs are snapshots of the composer and the producer Manfred Eicher taken during the recording of the album Te Deum in 1993 at the Lohja Church of St. Lawrence in Finland. Tõnu Tormis’ photographs also depict the composer in 1997, when ECM was recording Kanon pokajanen at St. Nicholas’ Church, Tallinn, with Tõnu Kaljuste and the Estonian Philharmonic Chamber Choir, and in 1998, after the composition’s world première in Cologne Cathedral. The exhibition also includes photographs from other trips abroad, and two photographs from 1978 in a domestic setting with the composer’s wife Nora Pärt in one of them.

The exhibition “Enchanted By the Work of Arvo Pärt” shows brief moments from the creative journey of the world famous composer. The display includes books, articles and recollections and opinions by different people, in addition to a large selection of Arvo Pärt’s works and quotes. We can also view portraits of the great master, made by the young artists at the Tartu Children’s Art School.

The exhibitions “Enchanted By the Work of Arvo Pärt” and “On Pärt” will remain open in the library until 14 November and 18 November, respectively. 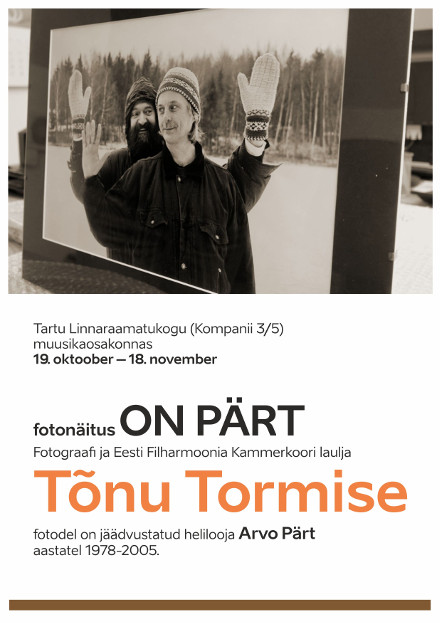